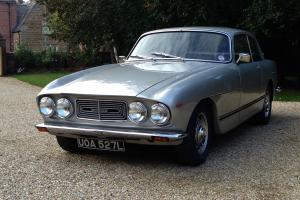 The very best of british the Bristol 411 Series was first shown at the London motor show in 1969. The car has a Chrysler V-8 engine that produced 340 BHP at 5. 00 RPM. with a top speed of 140 mph (220 kph). It went on to become the Autocar car of the year in it's class. The 411 has gained many accolades over the years including sensational write ups from the great motoring writers L. J. K Setright and John Bolster. John Bolster proclaimed the 411 to be the fastest four seater saloon in the World. With it's great looks and the Chrysler V8 to add both poise and presence on the road. it handles extremely well on the motorway as well as offering fantastic road holding on winding country roads.  The 411 is fitted with a 383 (displacement) 6. 3 litre (6. 77cc) Chrysler engine and Torqueflite automatic gearbox which had gained fame amongst American muscle cars of the 70s due to its strength. power and reliability. Blended with the superior Bristol build quality and a Park Royal hand crafted aircraft grade aluminium body work it became an unbeatable under stated combination. popular with the well healed and celebrities of the time. A car of this build quality and stature certainly didn't come cheap and it was possible to buy nearly three Jaguar E- Types for around the same cost ! The Bristol 411 Mark 3 was launched on 14th May 1972 and was the first 411 to carry the distinctive central grill of concentric rectangles flanked by two pairs of seven inch quartz halogen headlamps.

This 1972 Bristol 411 S3 was delivered new by its manufacturer. Bristol Cars to its Kensington High Street showrooms in November 1972. just six months after the model's launch. It is understood that the car was then delivered to its first owner who was based in the Channel Islands where it spent the next 10 years. Most recently owned by a London based barrister for a period of twenty nine years. The 411 was used by him principally between his purchase of the car in 1984 when it had covered c. 48. 00 and 1994 covering c. 30. 00 miles in that period.  The car is in original condition and comes complete with a file of invoices. including a number of MOT certificates tracing its history since 1984 which can be emailed to interested parties. The car was recommissioned in early 2013. as part of this process a new brake servo and Edelbrook carburettor have been fitted. The car is fitted with a stainless steel exhaust system and still has the original Instruction manual present.

Mileage records are as follows:

Other notes: This 411 is a good example of an original but not concours 411 with a genuine low mileage. It has covered just 5. 00 in the last twenty years. There is a small dent on the NSF wing as shown in the exhibited photograph. The car was repainted in 1994 at which time the original matt black grill surround was not retained but could easily be reinstated dependent on the new owner's preference.  The seller accepts payment only by bank transfer prior to collection.

from jed smith, dated 14 july 2014
hi do you have your Bristol for sale