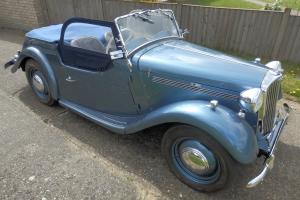 In the 1930s Singer manufactured a range of sports cars including the famous Le Mans models. These proved very successful in competition. particularly production car trials. At the 1935 Ards TT three racing Singers crashed at the same spot - this had a negative effect on the sale of Singer sports cars. and against a backdrop of reducing sales the last true sports Singers came off the production line in 1937.

In 1939 Singer introduced the Singer Nine Roadster. Although this car followed in the tradition of the earlier sports Singers it was really more of a sporting tourer. It had four seats and a robust three main bearing 1074cc overhead camshaft engine giving it a lively performance. Brakes were Girling rod type. and the gearbox had three forward speeds. For Singers this was to be a successful model. with Roadsters being exported world wide and selling in greater numbers than their more sporting predecessors.   Production of the Roadster ceased during the war but recommenced after hostilities. with modified chassis and steering. The Roadster was continuously developed between 1946 and 1955. with the final model. the SM (or 4AD) Roadster. boasting an excellent specification. including a sturdy 1497cc overhead camshaft engine. Girling hydro-mechanical brakes. four speed gearbox and independent front suspension. It had evolved into an excellent car.

246 CTW is one from the last batch of cars. being manufactured in 1955. It is one of the best SM Roadsters available. and is equipped with a 4:1 ratio axle for relaxed cruising. Weather gear is of high quality. the paintwork is excellent and the leather upholstery is in fine condition. It has recently had a crankshaft re-grind and other minor improvements such as the installation of direction indicators - essential on today's roads.

The vehicle is currently situated in Swaffham Norfolk where it can be viewed by appointment. For further information contact Barry Paine on 01603 810598.

Payment to be by cash. cleared cheque or other agreed secure method.

from Peter Doyle, dated 28 january 2018
Is this car still up for sale? My father in law had a similar one in blue and we are interested.
Wherabouts in Swafham are you. My parents lived on Brancaster Way for many years so I have spent a lot of time in Swaffham
Kind Regards
Pete

from Peter, dated 09 january 2016
Is this car still for sale

from Martin Davis, dated 09 november 2015
Hi. Is the singer still for sale please. I live in Derbyshire and could I make an appointment to view it. Regards martin Davis.

from Chris, dated 26 october 2015
Hi there,
I am looking at buying a classic Singer in the coming weeks and I live I Carlton Colville however I have noticed that your car is also in Anglia Car Auctions? is this the case or is it for sale direct here?
Many thanks and kind regards!
Chris

from chuck Peterson, dated 05 october 2015
I have a 1933 Singer and would like another, newer perhaps. Is there a top for the car. What do you estimate the shipping costs to be to Charleston SC? Any more pictures? Thatnk you. Chuck