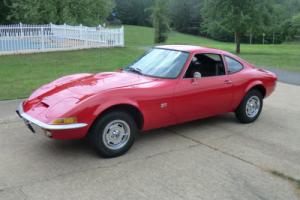 About this car: These cars are very prone to rust and that is why you seldom see them anymore. This is a very good example of a early GT with very little rust. The Belly pan under the battery is rusted as they all are but not near as bad as most. ( see pictures). I have had the car a little over a year and have decided its time to move on to something else. I have purchased many new parts such as: New headliner. new door and body weather stripping. new window rubber. outer window scrapers. under hood rubber. door sill rubber. new gaskets for windshield quarter glass and rear window. and numerous other small items.

The following are all in working order: Engine starts and runs very good with no smoke or unusual noises. Transmission shifts into all gears with ease and makes no unusual noises. Brakes work well and do not pull either direction. Horn. Headlights both bright and dim. windows roll up and down with ease. Right and left blinkers. Speedometer. Tachometer. Mileage indicator. Back up light. Tag lights. Amp Gauge. Temp Gauge. Brake lights. Parking lights. Interior dash lights. Interior courtesy light. Fuel Gauge. Fan motor. Windshield wipers both speeds. Emergency flashers. Emergency brake. Door locks. Tires have full tread and Headlights rotate with ease. Original jack still In place. All glass is good but the front windshield does have some wiper scratches mainly on the passengers side.

The following are not working: Original clock. Cigarette lighter. Oil pressure gauge. original radio and the fan motor works but the lever cable to turn the heat to hot is broken.

The following will need attention: The factory seat belts are old and should be replaced. Headlights rotate with ease and lock open but don't lock shut ( I assume the cable needs to be adjusted but the headlight assembly is complicated and I have not  tried to adjust anything). Carbs were rebuilt and work great but it is cold natured and they could be adjusted by someone more knowledgeable. Carpet is there but could use replacing along with most of the vinyl behind the seats and in the lower foot wells. Dash is bad as they all are and has a carpet cover over it now.

The chrome bumpers and all the light lens are original and therefore don't look new any longer.

The door jambs along with the engine compartment have never been repainted.

The paint is nice and shiny. Its Base Coat / Clear Coat that has been color sanded and buffed.

Overall this is a very good car with very little rust. This is not a restored show car but what I would call a very nice quality driver. Its fun to take to local car shows as its usually the only one there. I have shown as many pictures as ebay allows. Some pictures show the  inside with the interior removed when I had it out for cleaning. You can see how nice the metal is. Very uncommon to find one without rocker panel rust. Look at the undercarriage pics and you can still see all the factory spot welds along the rockers.  It runs good but still needs attention in several areas. I am sure I have left out many details about the car.   I have done my best to describe the condition of this car but encourage anyone interested in the car to come see it or have someone look at it for you before purchase.

This is no reserve auction but I do have a starting price that is much lower than the value of this car. therefore it will be sold.  There is no warranty on this car and is sold as-is as all old cars of this age are sold. I require a $500. 00 non refundable deposit within 48 hours of auction end time with the remaining balance due in cash at time of pick-up. If you are having it shipped we can work out the remaining balance. I can assist with loading but the buyer is responsible for arranging shipment. It can stay here for a reasonable amount of time while the buyer works out the arrangements. I am going to let the auction run its full time and will not stop early. If you have less than 10 feedbacks I will delete your bid unless you call me ahead of time. This is due to the many nonpaying bidders on ebay. Title is clear and in my name. My name is Mike and I can be reached at 662-816-8280 for any additional information.  Thanks.

from ROBERT HUDSON, dated 16 november 2022
Hey can you let me know if still available?
Thanks


from Bill Giles, dated 04 february 2020
Hi, I can't see if the GT is still for sale, could you let me know please? Thanks. Bill Giles