Seller's notes: There is a small blemish to the chrome on the nearside corner of the front bumper. 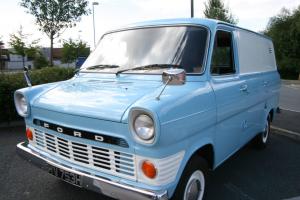 Ford Transit History in the UK

The Ford Transit. probably Fords longest running production model. which is still produced today. with the 6th generation model recently being launched.  A sad time for the UK was July 2013. when it finally saw the last Transit roll of the production line on 26/07/13. after 48 years of UK production. in favor of Fords Turkish plant.

Replacing the Ford Thames 400E. the MK1 Transit changed the way commercial vehicles where produced forever.  With its superior road handling. making it car like to drive. with it's 1. 7ltr or 2ltr petrol engines. According to BBC's Top Gear during the 1970's the Transit was used in 95% of all robberies as a getaway vehicle. undoubtedly due to it's performance.  A diesel version was also available.

Produced in many many formats. from Ambulance. Camper. Ice Cream Van. Recovery Trucks. Fire Engines to name just a few.

In stunning condition. this vehicle was reportedly restored by a very wealthy businessman. as pure indulgence. no expense spared.

The van was first stripped down to a bare shell. & then the paintwork was removed down to bare metal.  The van was quite solid to start with. & only received a couple of new front wings. rear small arch. back panel. a small plate under the bonnet & attention to the battery tray.

The body shop have done an excellent job.  The attention to detail in the preparation. have made this already solid van. probably better than it left the factory.  It really is a credit to the people who worked on this van.  It was given several coats of primer when preparation was finished.  It has led to a very very straight van.  If you look down the sides there are no signs of ripples at all. in a van period. that is fantastic.  The door gaps are what I would describe as fantastic. with great shut lines.

Finally the vehicle was painted in Blue & white.  The engine re-instated. all trims etc etc.  Chrome re-chromed. new rubbers. seals. carpets.  The seats where re-trimmed. & the vehicle was finished.  This has to make for one of the best MK1 Transits available for sale (if you can find any).

All viewings welcome during opening hours & by appointment outside those.  Delivery can be arranged at £2 + VAT per mile one way.

from Knut Arne, dated 18 august 2020
Hi. Were can i bye the rubber seal to the doors? And around the windows in the side door. The rubber that the windows is going up and down in? Best regards from Knut

I am emailing to ask permission to use your photo of your van in a television show called George Clarke's Amazing Spaces?

from CHARLIE BUHAGIAR, dated 29 july 2018
IS THE VAN IS STILL AVELABEL
IF YES WHAT IS THE PRICE AND WHER IT IS LOCATED

from Dbrack, dated 19 october 2017
Hi there I would like to speak to you regarding your Van please email me your telephone number and I will call you back many thanks