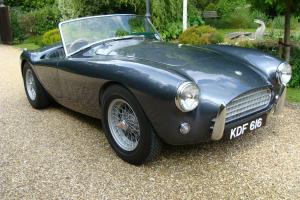 The AC Ace was introduced in 1953 to a design by John Tojeiro featuring an alloy roadster body on a tubular ladder frame chassis with independent suspension by transverse leaf springs. Originally powered by the AC 2 litre straight six engine. from 1956 the Bristol 2 litre straight six became optional. This was subsequently replaced by the 2. 6 litre straight six Ruddspeed. which was based on the Ford Zephyr engine. Some were built with a Raymond Mays alloy head and either triple Weber or SU carbs. Only 37 Ruddspeed powered cars were built before the Ace was superseded by the Cobra in 1962.

from jim collins, dated 14 november 2019
is this car still for sale?