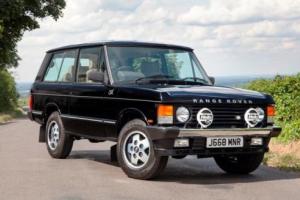 For sale by auction on Saturday 30 August 2014 with Historics at Brooklands. Brooklands Motor Racing Circuit. Weybridge. Surrey. Call 01753 639170
The limited edition Range Rover CSK is named after Charles
Spencer King. the man who designed the original two-door Range
Rover over 20 years ago. The CSK was intended primarily to
publicise the new anti-roll suspension and was promoted as a
sportier Range Rover. Most elements of the CSK's specification were
drawn from the four-door Vogue SE or from US-market models. Each
car has a individually numbered plaque on the radio panel
confirming its exclusivity. discreetly bearing his insignia and. in
1990. cost £28. 95 (manual). For an automatic you had to pay
£30. 19. 32. The Range Rover CSK features a number of modifications
improving both performance and passenger comfort. It's the fastest
production Range Rover ever built at that time with the proven and
a re-chipped version of the 3. 9 litre. V8 engine developing 185bhp.
The increase in performance is complemented by improved handling at
high speeds. Land Rover UK had introduced front and rear anti-roll
bars and sports dampers. to give a smoother. more comfortable ride
for on-road handling. The roll stiffness is increased by 25 over
the standard production model. This all gives remarkably positive
and responsive driving. The CSK is available with a choice of
five-speed manual or optional four-speed automatic transmission.
Standard equipment includes a six-speaker security coded stereo
system. air-conditioning. central locking. and electrically
operated tilt/slide sunroof. electric windows and heated door
mirrors. Also standard is the world's most advanced four-wheel
drive ABS braking system which prevents wheel-lock in the worst
conditions on any combination of surfaces. Permanent four-wheel
drive through a dual-range transfer box with viscous-coupling
central diff lock.

This rare manual 1991 Range Rover EFi CSK. number 153. can only be
described as better than new with an £120. 00 restoration bill
which includes 2. 40 man hours and only using genuine parts such as
'new old stock' chassis. front wings. gearbox. doors and bonnet.
The Engine is a 4. 6 litre. V8 with Kent performance cam and
lifters. During this nut and bolt restoration. everything has been
replaced and up-rated with performance upgrades to engine steering
and suspension. Finished in the stunning Beluga Black paintwork and
contrasting chrome bumpers and silver pinstripe coach lines whilst
discrete silver CSK logos are positioned on both front wings. The
interior is finished is beige. handcrafted soft leather seats. br/>co-ordinated leather door trims and a leather covered steering
wheel. all exclusive to this limited edition. This CSK is supplied
with a V5C registration document. an MoT test certificate. a copy
of the restoration bill and the photographic record. Looking better
than when it left the factory. it also drives better than when it
left the factory. The vendor has
secured the registration number J15CSK and is including the
retention certificate and new number plates with the
car.