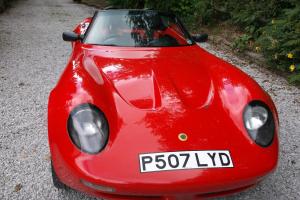 One of the first built. it is 5th of the 48 to hit the road and is in very good condition. Even less common. this car was partially assembled by the original owner rather than entirely factory built. The builder. a lifelong Caterham enthusiast. elected to give this car the more powerful Vauxhall VX engine (C20XE) that delivered 219bhp on the Emerald rollers on it's most recent visit for a remap. The non-factory build also lead to a number of unique / upgraded features on this car as can be seen from the specification list below:

headlamp covers  and glovebox. unlike some 21's built later

The outcome of the unusual build was one of the more capable Caterham 21's to grace the road. The car has seen just one or two track days in it's time and in the right hands was more than a match for lesser powered Caterham Sevens. However. the 21 chassis provides considerably more comfort and luggage space than a seven thus providing the perfect balance of dynamic performance and every day practicality.

This car is well known in the Caterham club circles and it both drives well and is a piece of English sports car history.  Sadly. it now needs to make space in the garage for new projects. after 11 years of ownership.

Why are you not reacting on my mail. I want to visit you to see the Caterham 21. Are you intrested in my visit or not!
Otherwise this was my last time to get in contect with you. Succes...

Why are yuo not reacting on my mails?!?

from Reinier Volkersz, dated 15 february 2017
Hello (here I am again),

Yuo didn't react on my first mail, but can yuo show me the registration papers of your Caterham 21?

from kristof cleeren, dated 03 january 2017
is this car still for sale

from FranÃ§ois , dated 03 september 2015
Hello,
Is your car stil for sale?
Regards,
FranÃ§ois