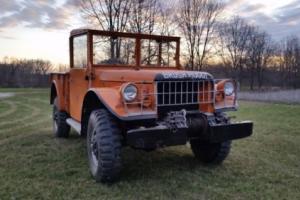 Selling my 1954 Dodge M37. Clean title. Engine is a 230 CI Chrysler flathead inline 6. Trans is a 4 speed. It is 4x4. It has a PTO winch that is broken but I have the part to fix it. Almost no rust rot on the truck at all. Any rust is surface rust.  Brakes work but the rear passenger side is leaking fluid.

I have a video of it running when my friend had it last year. The truck would run but he believed the timing to be messed up. Truck needs someone who can resolve the timing issue.  I got it from him about 8 months ago. pushed it in my shed and haven't touched it since. I don't seem to have the motivation to work on it so its time for it to go. Also have two spare axles that go with the truck. Located in Effingham IL.

Also there has been some confusion as to the current status of the truck. As previously stated the truck had been running. Currently it will not start. In an effort to correct the timing issue the previous owner advanced the oil pump gear 1 tooth. This set the timing to far forward for the truck to start. It needs turned back and the timing dialed in from there. I have a video that I will send to anyone who messages me of the truck running before this change was made. When the truck was running the oil pressure and voltmeter were where they should be. (Also have pictures of this)

Any other questions. don't hesitate to ask.