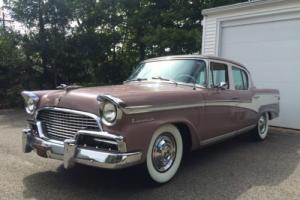 Up for a LOW RESERVE auction is a fine example of an original. unrestored Studebaker. This is the top of the line sedan with the extended wheelbase. the Classic. This car was Studebaker's last gasp in the full size field. The craftsmanship to me is superior to the big three. This car is proof.
An interesting history. this car spent its life in the dry mid section of Oregon. The original family put the car in storage in 1969 after its owner passed and didn't show its face again until the mid 2000's when it was purchased and brought back to life by a Studebaker/Packard enthusiast.
The car is rock solid. All original body panels and paint (except the roof which was painted at some point. ) and shows no accidents. Lovingly cared for. the seats were covered in plastic when new and not until recently was the plastic removed to reveal a like new original fabric. The condition of the seats alone is not to be believed. The car is equipped with the 289 Sweepstakes V8 which has a reputation of being both bullet proof and reliable. It starts right up and runs smooth and quiet. The car is also equipped with power steering (not brakes). an automatic transmission and a rear radio speaker.
With originality comes wear. The paint is thin in spots and starting to reveal the original primer below. There is a dent on the very lower edge of the right rocker panel (not very noticeable) and some of the chrome trim is pitted here and there. The star of the interior is the seats but the door panels do show some minor wear and the dash vinyl padding is loose around the cool Cyclopes speedometer. The original windlace around the doors also needs attention. I removed the original carpet to reveal the clean. mostly rust free so a new carpet will be in order. The tires are Coker Classic wide whites for a correct look but are old and ride like rocks.
I'm a purist and hate to sell but I have too many cars so a couple need to go to be able to maintain proper storage. I hope whomever gets this car respects its originality and keeps it as close to original as possible.
My reserve is very low. I just want it to go to a good home. I wouldn't suggest long distance travel until you have it gone through. I've only driven it locally and just recently. the fuel pump began leaking some. The car is registered. inspected and titled in the state of Massachusetts.
Ask any questions and bid with confidence. I've tried to be as accurate as possible.

The car is located in Weymouth Massachusetts. About 20 minutes outside Boston.