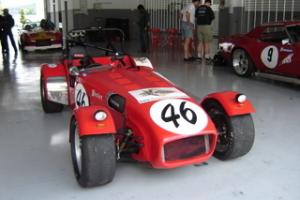 Chassis # LCS 4567 17RD is an authentic Caterham Seven race car that was originally built in 1986 and has never been UK road registered. However. I am sure this could be achieved with a little work to gain DVLA approval.

During the recent past. this car has been campaigned in the Far East where it was extensively raced in Malaysia at the Sepang circuit. It was highly successful and well placed in 2008 Hong Kong Classic Championship which was a support series to the A1GP Championship. The car was latterly developed and raced as part of the "Winkelmann Racing" team. driven by Paul Winkelmann and supported from the UK by Classic World Racing. Prior to this Mike Ricks and Daniel Bilski drove it in various Hong Kong Car Club events.

The engine is a full race 1600cc Ford. fitted with Weber DCOE 40's and Pipercross filters along with a full dry sump system. It's recorded to be producing 155bhp at 6375rpm on the bench and having completed just 2 hill climbs since this set up. the engine is fresh and believed to be in fantastic condition. Mated to the engine is a Ford type 9 gearbox fitted with Quaife 5-speed straight cut gears.

Running gear of the car comprises De-Dion rear suspension with adjustable Intrax coil over shock absorbers all round fitted to Alcon Brake callipers and vented front and rear discs. The car is also fitted with Compomotive "minilite" wheels 7"x15" with Hoosier slicks.

The rest of the car is equally well equipped with the cockpit featuring an electronic Motec Sport dash. transponder and a Full Racing seat with a Willans 5 point harness.

The car is fitted with twin fuel pumps. anti-cavitation tank and dry cell battery with provision for a jump-start battery connection and it has all the necessary safety equipment in the form of a Roll cage with Petty strut. rain light and a Lifeline plumbed-in fire system.

Every inch of the car has been considered in its race preparation such as an aluminium passenger tonneau cover (which still retains the final scrutineers label from Sepang) along with an aero kit fitted to the rear wings to help reduce drag and create downforce. which are easily removable. A rear undertray/diffuser is also available with the car. but not fitted.

It is estimated that the specification of this car would cost in excess of £35K to build.

I have a spares package also for sale on ebay (engine spares. 3 sets of wheels incl Prisoner)

The car is located near Hemel Hempstead in Herts. so is about 15 miles from both the M1 and junction 20 of M25.

The car is advertised elsewhere so I reserve the right to end the auction early.

Thanks for looking. please email if you have any questions.

Please pay via Cash. Paypal or cheque which must clear before vehicle is released.

International buyers please note that you must NOT pay via PayPal.
At the end of the auction you will be provided with bank account details into which the purchase price must be paid.
This will then be checked for clearance before the car will be released to any shipper or agent etc. If this is not acceptable then please do not bid.

from Tim Morris, dated 12 july 2013
Hello there,
I am very interested in your caterham. If the car is still for sale I would like to arrange viewing. What is the best number for me to call you on?
Thanks
Tim (07876255924)