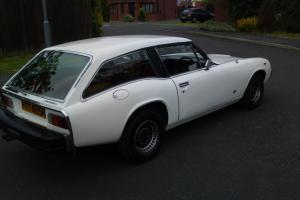 1976R  Jensen GT. Being offered for sale due to loss of storage and another project waiting for my attention. A very rare car which is in sound condition with a very nice interior and is mechanically very good. Recently re-commissioned. now running and driving well with MOT to 28th June 2014.

Registered in September 1976 it has had 12 keepers in total. the last owner before me having the car since 1993. The chassis number is 30021 making it a very early car which explains the fitting of the vinyl bonnet bib (apparently only fitted to the first fifty or so cars).

The car was last on the road in 1997. It has been stored in a clean. dry garage. There are many receipts with the car. mostly in the date range of 1987 to 1996. The significant items being receipts for body rebuild parts: inner wings (front and rear). inner and outer sills and engine rebuild parts such as bearings. crank grind. gaskets. oil cooler. radiator. clutch. The engine build receipts are dated 1993 so it can be assumed the engine has done little mileage since.

It has the original owner's handbook which is in very good condition plus. remarkably. the original service history book. the first owner being a Mr Richardson of Torquay. the car being supplied by Torquay Motors. There are six services stamped in the book. the last being at 39575 miles in September 1980. There are concurrent MOT certs from August 1983 (49077 miles) to June 1987 (57610 miles). presumably the car was taken off the road at the MOT expiry in 1988 as the next MOT is October 1995 with 64512 miles. The current MOT for June 2013 shows 67194 miles. Obviously not concrete proof but it is an indication the mileage could be correct.

Also with the car are various technical information notes. a copy of an original sales brochure and various Jensen club magazines and info.

As mentioned above it has had inner and outer sills. front and rear inner wings. the receipts being dated around 1990. There is some evidence of minor localised chassis rail repairs. these have been done to a good standard and have lasted well. The MOT showed only one minor advisory (one slight ball joint play) with no mention from the tester of any structural issues. The fuel tank is in good condition. the spare wheel holder still functions. The underseal is still intact in most places. Surface rust is showing on the front cross member/wishbones etc. Basically. before regular use the underneath of the car just requires a pressure wash. some wire brushing and a coat of black waxoyl.

Externally the body is in sound condition. some of the panel gaps are not great. bonnet fit for instance requires sorting. The doors open and close OK. All four wheel arches are good. The worst place is some swelling of a previous repair to the offside rear wing just in front of the fuel filler. The paintwork is poor due to minor surface rust in a few places. some chips. mismatch in the colour and fading.  In the pictures and from a few feet away the car still shines and looks presentable and could be used as is but considering the rarity and the otherwise good condition of the car it would be well worth the time and expense of a re-spray.

The bumpers are tidy and will refurbish easily. The various stainless steel trims. window frames. sill plates etc are in good condition.

The car runs and drives really well. The engine is in excellent condition. A new cam belt has just been fitted. The engine sounds nice and performs well. Once warm it maintains a steady water temp and shows 75PSI oil pressure. No oil leaks. no smoke. Gearbox. clutch and rear axle are fine. some play in the gear lever bush but no issues with the gearchange. No wheel bearing noise or play. New front brake pads were fitted for the MOT. these are not yet bedded in and there is still some surface rust to the discs. It appears in the early 90's to have had new rear shoes. cylinders and brake pipes throughout. The rear silencer was holed so has been replaced with two straight pipes. There are two other silencers so no issues with noise for the MOT and it does sound great! The tyres are not those which it was sitting on in storage. They show no signs of age. have good tread and have just been balanced. The wheels run true. are in tidy condition and there are three spares. There are various engine spares. crank. cylinder head. valves. cam covers. oil pump. distributor etc.

The interior is very clean original and tidy. All instruments are in good condition and working. Electrics to sort are the interior lights. heated rear window and rear wash/wipe. The battery is about six months old. The dash board has some fading to the varnish. Seats. carpets. centre console. door trims and luggage area are really nice. The driver's seat has some stitching to a small split near the shoulder. The seatbelts are in good condition. The headlining is grubby and has sagged but not enough to touch your head! With no further work the interior is a nice place to be but has the potential. with a bit of effort. to be excellent.

In summary a nice sound car that with just a bit more sorting could be used as is. However considering it's history and rarity it should be worth the time and expense having the body and paint issues sorted.

I may be able to help with reasonably priced nationwide delivery. Overseas interest is welcome.

from Daniel Mayer, dated 29 december 2013
Is this car still available?