Seller's notes: This is for restoration, but most parts are there, engine runs and drives, imported from the US and was driven on to the container. some new parts are present, like the carb and other parts. 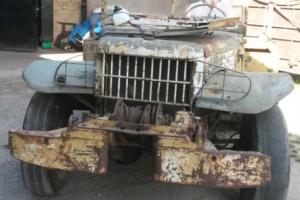 This was found on a farm in northern California. shipped at cost to the UK. about 2011. kept in an enclosed barn. drove on to the container & runs and drivable. as a farm vehicle it had parts welded on to it like replacement front wings/fenders (which have been replaced with type)

I replaced the carb with a new one Have other parts like new light switch blackout light (not the rim) rear bumperttes driver seat.
and much more. has four combat rims and a 5th wheel.

ideal for a rebuild project. no real rust most parts can be got off the shelve from guys like Steve at Dallas Autos. main bits missing canvas and sticks passenger seat. a guy who gets to the dig out has said he will bring one over.

bearing this in mind this and the lack of Good rebuildable trucks. I. asking about £5. 50. which has been confirmed as a fair price.

I currently have two offers one which I feel is not quite there and one which the person is trying to raise the funds.
on top of this she will be seen on other sites including Milweb. and maybe sold before the end.
message me if interested and I will answer any question I can and make contact if serious. thanks for looking. I really don't want to sell. But!!!

from steve cook, dated 19 november 2017
you're probably getting bored of this question but is this still available ?
thanks, steve


from Malc lee, dated 13 november 2017
Hi can not tell if this is an old add but have you still got the dodge

from Malc lee, dated 13 november 2017
Hi can not tell if this is an old add but have you still got the dodge