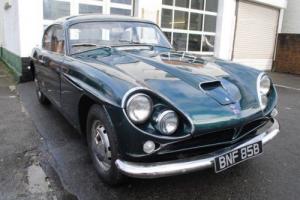 For sale by auction on Saturday 08 March 2014 with Historics at Brooklands. Brooklands Motor Racing Circuit. Weybridge. Surrey. Call 01753 639170
The Jensen C-V8 is a hugely elegant four-seat GT produced
between 1962 and 1966 and had fibreglass bodywork (only the door
skins were steel). as did the preceding 541 series. All C-V8s used
big-block engines sourced from Chrysler; first the 361ci then. from
1964. the 330bhp. 383. Most of the cars had three-speed Chrysler
Torqueflite automatic transmission although some were produced with
a four-speed manual gearbox. It was one of the fastest production
four-seaters of its era with the Mk. II capable of 136mph and
acceleration from 0 - 60mph in an impressive 6. 7 seconds. The
upgraded Mk. II also had Selectaride rear dampers and minor styling
changes. The model was discontinued in 1966 after a total
production run of 500.

This example is finished in green with tan leather interior. It
was restored in the 1990's at a cost of over £40. 00 and still
presents well. but not perfectly. today. It runs and drives very
well and the chassis also appears to have been fully restored with
no signs of rust. Orchard View Classics have recently undertaken
some remedial work including a carburettor rebuild. the fitting of
twin thermostatically controlled fans and a brand new exhaust
system. sourced from Cropredy Bridge. It is also supplied with an
MoT test certificate valid until December 2014. This is every inch
a gentleman's driver with characteristics of a grand tourer.
Elegant and hard to find today.