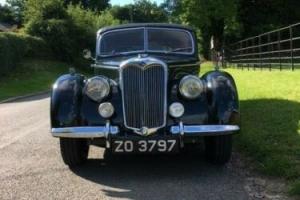 I bought this Riley in December 2020, adore it, and intended to keep it for the rest of my life. Why, then, am I selling so soon? The answer is simple: I was unexpectedly offered the opportunity to buy the car of my dreams (apologies to the Riley Club): a Sunbeam Talbot 90 Series 3 convertible. So, sadly, as we only have room to store one classic car, the Riley must go.

One of the original advertisements, dated 12 December 2020, read as follows:

1952 Riley RMA Saloon / Registration Number: ZO 3797 / Chassis Number: 42S20057 / Engine Number: 10173 / Transmission: Manual / Steering: Right Hand Drive / MOT Test Expiry: Exempt / Road Tax Exempt / The Riley RM series is considered by many to be amongst the prettiest post-war classic motor cars. With flowing coachwork and a 1496cc twin cam power unit providing smooth and abundant performance plus torsion bar suspension and telescopic dampers this still remains a true driver's car. Supplied new by Brittain Motors of Dublin and originally maintained by them, this particular example was always garaged and mileage kept low. A lengthy period of dry storage followed and the motor car retained its good condition up to the 1990s. During the last two decades, the Riley has been the subject of a no- expense-spared restoration in the hands of two recorded keepers and in recent time, further finishing work and re commissioning has been carried out. The result is a very fine example sure to promote ample pride of ownership for its new owner. The lovely coachwork is finished in a very dark British Racing Green , generally good with few blemishes. The chrome is also good and even the complex bumpers are present front and rear. The Vendor points out that the running boards and sills are totally sound, as is the spare wheel access panel. The often overlooked roof covering was professionally replaced along with window rubbers and seals. Door shut lines are good and the doors close in true carriage fashion. The underside chassis and framework is described by the vendor as having no visible sign of corrosion or rust. The quality interior is equally good. The headlining has been replaced in the correct West of England Woolcloth , with new piping and Furflex trim. Doortrims are also A1 and have renewed seals all round. The brown vinyl seats are described as excellent and the carpets have been renewed with neatly fitted insulation. The flush fitting sun visors are also described as just perfect. The dashboard and surrounding woodwork are good with all gauges present and working apart from the clock. Mechanically the vendor tells us that the engine shows good oil pressure with smooth driveline helped by a new clutch and an overhauled starter motor. Brakes have recently been overhauled with new cylinders, reservoir and rubbers. The electrical system has been rewired and even the rear pillar semaphore trafficators light up nicely. Lights are all correct and working and the special equipment dynamo is said to be charging well. The exhaust system is good but the vendor points out that the standard silencer has been replaced by a later unit. Standard steel wheels are fitted with good tyres. Not only is this then one of the most desirable saloons of the period, it is quite one of the best presented examples and should prove to be a truly excellent acquisition. The Riley comes with V5C registration certificate, a large history file and a workshop manual.'

All this was true, except for the fact that the foglamps and heater were not connected, and the 'large history file' was a photocopy of the manual. The vendor was a firm running a fleet of classic cars for hire to the film industry. As such, they had regularly to service their vehicles to ensure their reliability. During the pandemic, with the consequent decline in their trade, they were downsizing. But to be on the safe side, I asked the vendor to do an MOT, as I did on the Porsche I was trading in. Both tests were fine. As I intended to use the Riley regularly, however, I also got Quorn Sports and Classics to give it a thorough inspection, connect the fogs and heater, adjust the dip switch, change the oil, plugs, and points, replace the somewhat rickety trafficators with new/old ones, service the starter motor, and generally to tune the car up to tip-top performance. They were very impressed by the overall mechanical condition and the solidity of the underside. If you want an objective opinion, please contact their senior engineer, Carl, on quornclassics@mail.com.The tread on the original tyres was excellent but they were old and beginning to crack, so I replaced them very recently. I also had the nearside front wing and all the wheel rims resprayed to sharpen up cosmetic appearance.

In short, this Riley is indeed a very good example of the RMA. It's not in concourse condition or the price would be £10,000 higher, as it's a rare item, being one of the few left to have been built in Dublin. There are some pinprick bubbles in the paint, the chromework is showing its age (although still pretty good), and the clock doesn't work (a common fault easily fixed by a specialist known to the Riley Club). Other than that, I can't fault it. It starts on the button, idles quietly, the gearbox and engine are smooth, it cruises happily at 50 mph (although it will do 70 mph), the steering is sharp, and it always attracts admiring attention wherever it goes. It would be a perfect wedding or Peaky Blinders prom car. I've done c. 450 miles in her since December, and have lost count of the strangers who have come up to praise it.

The ebay advertised price in December was £14,900, which was too much, and, with trade-in, I effectively paid £12,000. I've also spent over £1,000 to smarten up the car and make it safe and reliable. The Riley will come with two original handbooks, three sets of keys, some original tools, all my bills, a history file such as I have been able to reconstruct it, Riley Club and R M Club magazines, and a full tank of petrol. Feel free to contact me on 07736 806289. Serious prospective purchasers are more than welcome to inspect the car. I'm sure you won't be disappointed.

Many thanks for looking.

from Maurice Denvir, dated 12 december 2021
Hi, I have seen this car advertised now for quite some time. Is it still available?