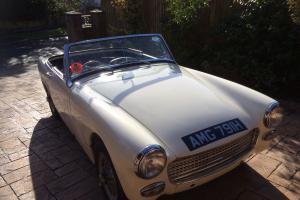 Here we have regrettably for sale my Shorrock supercharged Sprite. purchased the sprite in 2005 and over the last 9 years have spent nearly 15k on it with 4. 5 k being spent in August 2013 with JSWL Classics in Waterloville having the front suspension and other bits and pieces rebuilt. I have a huge file on this car with all the receipts and MOT's going back to 1988 the car has only covered 32k since then. I purchased the car in 2005 and in 2007 paid £1000 for a 'as new' unused Shorrock supercharger on ebay and had it fitted to the Sprite by the MG Barn in Wickham. ants - since then the car has only done 2500 miles so the supercharger is just run in!For a car that is 45 years old performance is very good almost scary as standard brakes with no servo! However it does take a lot of people by surprise and makes a lovely noise. virtually everything on the car has been renewed or replaced either by me or the previous owner that undertook a major restoration in about 2000 (photos and invoices in accompanying file)As you can see from the photos the car is garaged and only used in dry weather so the soft top is not attached but can be before purchasing and is in excellent condition. I have also removed the bumpers as I prefer the look without but the can be reattached easily if required. I am selling my house so the car has to go - no garage in my new place so have boxes of manuals and spare parts including the twin carbs. lectronic ignition. pare tonneau cover etc. if you want to remove the supercharger I have everything you need to convert back to twin carb all this will go with the car if you want it FOC!The only problems with the car are fairly standard ones for all sprites of this age the door panel gap is awful. ngine drips a bit of oil and occasionally when cold the car pops out of second gear . I have placed what I feel is a very low reserve as I need to sell it but will not give it away!I will not send the car abroad and buyer needs to collect. Thanks for looking