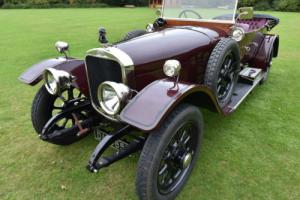 The recipient of a massive £160. 00 restoration over the past four years with the majority of the mechanical works being undertaken by noted vintage specialists VBE restorations. A massif sheaf of bills. far too detailed to photograph & display here comes with the car attesting in the minutest detail to the works done on the car.

This car was first registered on 23rd July 1919. being one of the first off the production line following the end of the First World War. During the war the Sunbeam Motor Car Company had stopped production of cars in order to concentrate on the manufacture of aero engines for military use. The 24hp Sunbeam in fact. designed before the war and was a development of the 30hp Edwardian model. so it is very much an Edwardian car in design. but its production was delayed by the onset of hostilities.

The car wears Brewster body number 5839 which is quite similar. although more rakish then those produced by Sunbeam themselves. The car's early ownership is unknown. but it was owned by the film studio Warner Bros in 1967. and it made a brief appearance I the film ‘Cassablanca'.

The four year Restoration involved removing the body & attending to every conceivable item. The engine gearbox & rear axle are completely renewed. The side valve 4½ litre engine was rebuilt with new pistons. valves. camshaft. inverted-tooth timing chains and sprockets. and a new water pump casting and top water manifold. The radiator was rebuilt with a correct honeycomb core. The gearbox was fitted with a new set of gears. A new crown-wheel and pinion were fitted to the refurbished back axle. New artillery wheels were made using aluminium castings to which 895 x 135 steel beaded-edge rims were bolted. &#8195;

The Brewster body was retained. but refurbished with new seats upholstered in buttoned Purple leather to match the new coach paint. A new windscreen was tailor made. and a new hood frame was covered with a mohair hood. A new two part tonneau cover was also fitted along with a hood bag. New wings were made in the correct style for a 1919 Sunbeam to replace the somewhat dilapidated ones that arrived with the car from the USA.

The restoration was finished in 2014. and the car has done about 2000 running in miles since. The result is an immaculate car in first-class mechanical condition. With a low revving engine and a high gear ratio it is an excellent. comfortable touring car which will cruise at 55mph all day long and climb most hills in top gear. The gear box is easy & pleasant to use particularly when compared to a similar W. O Bentley or Lagonda; the cogs being arranged in a mirror image of what is today regarded as conventional. First is found where third usually resides & third where first is more usually expected.

The car is being sold due to the advancing years of the current owner & his difficulties expereinced in getting in & out of the car. It shares garage space with a more upright 4 1/2 litre Sunbeam saloon of the same period. This is a car that may be bought. rallied & used with absolute confidance as everything that can be done ot the car has been done to it. Driving it is a pleasure as it is extremely long legged & relaxed at speed & indeed not dissimilar to a silver Ghost although of course far far rarer.


More pictures may be viewed on our web page at http://www. vandp. net