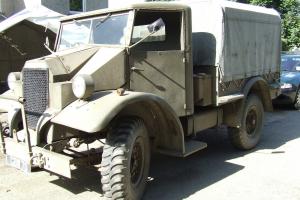 Ford F15. only 3400 genuine miles from new.
Original panels. tyres and wood. V8 4litre engine. with original 6volt and starts first time. brakes and steering like new. Has canvas windows. Has been kept in the dry.

HISTORY - This vehicle was issued to the Special Operations Executive at Thame Park. in 1940. It was used mainly for training French radio operators. On the departure of the SOE the then owner of Thame Park acquired it and it was used around the estate until 1950 where it was then left in a sawmill until 1986 when the park was sold. At this time it had only 762 miles on the clock. This information was in Wheels and Tracks magazine (issue number 25) which comes with the vehicle.

Comes with it's Ford motor company driving-maintenance-repair book. Also a Ford Illustrated spare parts book issued in 1943.
It also has a rare original number plate which has been valued in 2010 at £3. 00.

I have been on the internet to research this vehicle and it seems to be rare and the only one of this model around.

This vehicle has a genuine World War 2 history and is 99% original from when it was on War duty at Thame park.

from Jean-Claude Mulot, dated 11 november 2018
Is this truck still for sale?.
Many thanks.
J-C

from Zdenek Svestka, dated 02 september 2018
Is the car still for sale?
Thanks for answer.