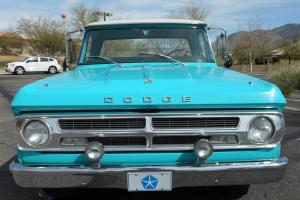 Up for sale is a rare optioned 1970 Dodge D100 Adventurer Package with factory bucket seats with folding center console and factory fog lights. 318 poly V8 with automatic transmission. This truck was owned by one family until I purchased it from the estate of the deceased widow of the original owner last year. It has 48k original miles that I believe are 100% accurate based on the condition of this vehicle and there is documentation to prove the miles. I will outline the truck in more detail below. but the pictures speak volumes on this very rare. beautiful truck.

HISTORY: The truck was purchased by the original owner on 11/5/1969 at Lewiston Dodge in Lewiston Idaho. The original owner made the short drive across the state line from his home in Clarkston. WA to pick up the truck. He had wooden side rails custom built for the truck bed that protected the bed rails and rear glass of the truck. The truck was garaged from day one.  It was factory undercoated but would never need it because he never drove it in the bad weather as you can tell when you inspect the truck. The truck never moved from that home where the owner and  his wife lived for 44 years.  The widow of the original owner put the truck in her name in 2003 so I'm assuming that this was the time the original owner passed away. The widow lived until September of 2009 and when she passed away the truck became part of the estate and their daughter was the executor of the estate. Last year they decided to finally sell the three remaining cars of their parents. of which this truck was one of them. The other two were equally as nice (also Mopar vehicles) as he kept all his vehicles in like new condition.  As you would expect he kept a file of all expenses this truck ever accumulated which is a short list indeed. The original tires were replaced in 1991 with 44. 22 miles on the truck. They were replaced with the tires that are on the truck now. The tires look new still which you would expect after only being driven about 4k miles since 1991 (that's 23 years folks!). A 60 month battery was purchased in August of 2004 with 47. 56 miles on the truck and another battery in 1980.  I'm sure there must have been other batteries but these were the only two receipts I saw. In 1997 the starter was replaced. That's all the maintenance on the truck since new according to family members who said he kept anything done to the truck. He even has the receipt for the vintage floor mat you see in the pictures that was dealer purchased at the time he bought the truck. One more amazing detail about this truck is that the State of Idaho back at that time had to have the Department of Law Enforcement inspect the new vehicles and the approval sticker is still on the front windshield of the truck with the correct expiration month and year punched out (see picture).

EXTERIOR:  The exterior of the truck is just beautiful with all original paint shining very nicely after 44 years! It came with the three tanks. one in the cab and two saddle tanks. The white stripe is factory as it is shown on the build sheet which I found under the carpet. All chrome is free of pitting and looks great. Grill is virtually perfect. Factory fog lights give it a distinct look up front and they work perfectly. All wheel covers are in near mint condition. Wheels show some wear from the road and I thought about having them blasted and powder coated but I just wanted to keep it the way it was the best I could. All lenses are bright and clear. Inside of the bed is very straight and shows some scratches from use but very minimal considering the age of the truck. All glass is perfect. Doors open and close with ease as does the hood and tailgate. There is no rust underneath the truck. as mentioned earlier it was undercoated from the factory. The only sign of any rust anywhere on the truck is a tiny bubble on the very bottom of the front right fender below the molding and its about the size of a pencil eraser. It is just a bubble but not rusted through and is not structurally compromised. It just appears to be a isolated area. Zero other rust concerns anywhere on the truck. The factory Jr. West Coast mirrors are in exceptional condition with no corrosion and just crystal clear. The top has the factory "textured vinyl roof" that Dodge was marketing at the time to make the trucks look more luxurious. Their marketing slogan at the time was. "Dodge Adventurer - The Sport Truck that leads a double life. For work or play. " For those of you who may not know about this. it is a sprayed on textured paint. it is not vinyl. but was supposed to look like vinyl. As far as any dents. there is one small dent on the top that I could not get to show up in photos and on the passenger's side just behind the fuel filler door there are some slight creases noted there which are very shallow and barely noticeable. That's about it for any dents. There are multiple paint scratches and chips consistent with a 44 year old truck. mainly on the drivers door edge. but overall very clean and very well kept truck that shows beautifully in it's original condition.

INTERIOR: The interior is beautiful with the Adventurer Package trim. The drivers seat shows some seams that have come loose and slight tearing but otherwise there is no damage to the interior. Headliner. door panels. dash pad. instrument cluster are all in excellent condition. Steering wheel shows no wear on the grain pattern consistent with a low mile truck. All gauges work perfect except the fuel gauge which recently stopped working and likely needs a sending unit replaced. Radio does not work but the truck had an 8-track player installed under the dash when I bought it and I think they by-passed the radio in favor of the 8-track player so I think it just needs to be hooked up. I have not tried messing with it yet but I think it will work. Heater blows hot and strong. All dash components look like new. Carpet is in exceptional condition. mainly due to the heavy vintage plastic floor mat that has been protecting the carpet since the truck was new. Windows roll up and down effortlessly. Doors lock as they should. Interior floor boards look like when the truck rolled off the assembly line. I removed the carpet when I got the truck to give it a good cleaning and when I saw the floors I was just amazed (see pics). It was also nice to fine the build sheet taped to the floor on the driver's side.

MECHANICAL: When I got the truck it was leaking from the valve cover gaskets pretty bad. They were the original cork gaskets that had hardened and cracked over time. I replaced them and repainted the valve covers with the correct Mopar color for the engine that I ordered through Summit. The carb was rebuilt because it was pretty gummed up from years of sitting. Fuel was drained cleaned. All fluids changed and filters. Starts right up every time. Runs good but not perfect. I just cruise this truck and have never driven it hard and it runs perfect for that type of driving. It could be tuned up and would probably run stronger but as is it runs just fine. Stops straight. shifts a little hard at times but not consistently. All lights and turn signals work as they should including the cool hood mounted turn signal indicators. Runs cool with no overheating issues. Everything is bone stock on the engine and never messed with other then above mentioned (and new plugs/cap). Jack and tools look brand new. Truck drives tight as you would expect from a low mile truck.

SUMMARY: How often will a truck like this come along with the options and history and low miles. These old Sweptlines are getting more and more popular and harder and harder to find in this kind of condition. This has to be one of the finest examples left in existence of an unmolested 1970 Adventurer and the stunning color combination of Bright Turquoise with green interior is truly an attention getter. These pictures were taken under very hazy sun. On a clear day the sun really makes this truck stand out. When I drive this truck. EVERYONE looks. It's just a very cool old truck that will certainly climb in value every year making it a great investment opportunity for any car enthusiast.   I sincerely hope that this truck lands in the hands of someone who will preserve it in it's current condition and will appreciate it for it's original beauty that has defied time and the elements. The only reason I am selling this truck is I have located a very similar truck in a short bed that I am trying to free up funds and space to purchase. If this truck doesn't not sell. I will shed no tears trust me. I may be listing this in other media so I do reserve the right to end this auction at anytime if the truck does sell elsewhere. With only 24 pictures allowed for these ads. there is no way I could take post pictures of everything that I wanted to show about the truck. If you need any other pictures I would be more than happy to send them to you individually. just ask. There is a $500 deposit due within the first 24 hours after the auction is over payable through Paypal. Check my feedback. check the pictures and bid with confidence! Good Luck!!

I have been getting a lot of questions about power steering. The truck does not have power steering. It is not a hard steering truck and I manage it just fine and I have a bad right shoulder.

from Paul, dated 20 january 2016
Is the truck still for sale and how much
Thank you Paul