1947 Ford Other Pickups for sale 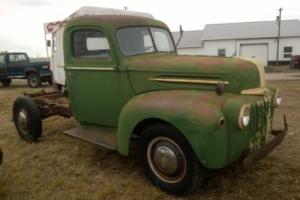 1947 Ford Pickup Truck31265 miles!
Drivetrain/chassisThis low mileage truck runs like a dream! Most of these trucks out here were used as grain haulers once a year to the local elevator after harvest. nbsp;so seeing 50-60. 00 miles is not uncommon for us. but 30k is pretty low! The truck was pulled from the barn and taken to a local second generation old timer mechanic that has been working on these old vehicles since the inception of the automobile. nbsp;no exaggeration! The motor was gone through. so this thing runs so quiet and smooth you can barely tell its running! Shifts and drives good too.   Chassis looks good. drives smooth. The one tire pictured off the truck had a slow leak in the tube so the Spare tire is on it. but the tube could be fixed so the rear tires would then match. Has the all the hubcaps and it has the rare 3/4-1 ton rear end that is worth 1000 on its own.
InteriorThe interior shows its age from sitting. headliner sides and wind lace is sagging from sitting. and though the seat vinyl has some time checks on the top back there isn't a rip or a crack through to be seen!  The floor mats were in it when we got it but when we removed them for pictures they broke up from sitting.
BodyBody is pretty solid. has very little rust. a few pin holes in the floor(that would easily be welded or filled with thick POR. really they could be left alone if you plan on storing indoors) The cab corners look pretty good. just a couple split outs that could also easily be welded if someone wanted. The grill is straight. the cab itself is very nice the running boards are also nice. The fenders have some bumps and bruises on the front but all solid metal for putting it back to normal. The passengers door outside has no rust through but the bottom inside has some rust. the door drivers door is nice even the bottom inside.  Glass has some cracks(rear window and front drivers WS) and age delamination. but its all flat glass and new glass is like $250. so I always recommend replacing the glass for safety even if it appears good and you plan on leaving the truck the way it is).  This truck was ordered as a stake bed (as it has the short running boards) and it had an auxiliary fuel tank installed. The dry rotted stake bed was removed.  We removed the auxiliary fuel tank with the intention of installing the pickup box off of the other truck in the pictures. nbsp;but then we decided to list the truck the way it is in case the new owner wanted to keep it a stake bed. and we listed the other truck at the same time also so the new buyer would have the option to purchase the second truck with all the parts to convert to a standard bed. and even have a second truck for parts or to recoup some expenses.  (Just check our other listings by clicking below. we also have other trucks listed as salvage that are not salvage. but easy projects)      Anyway a very hard to find. nice low mileage post war Ford truck for you to drive around while tinkering on.

I'll let the pics do the rest of the talking.

Please Click HERE To See Other Vehicles For Sale

from Rob, dated 12 january 2020
Good Morning, How much would it cost to get that Ford truck to the States I'm in Phila. Pa.? Also, I'm assuming the box is gone? Thanks, Rob

from Rob, dated 12 january 2020
Good Morning, How much would it cost to get that Ford truck to the States I'm in Phila. Pa.? Also, I'm assuming the box is gone? Thanks, Rob