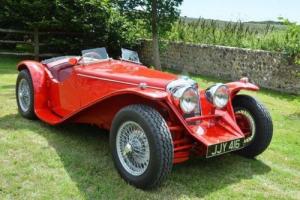 For sale by auction on Saturday 29 August 2015 with Historics at Brooklands. Brooklands Motor Racing Circuit. Weybridge. Surrey. Call 01753 639170
The Riley Imp was first produced in 1934 with a short production
run lasting just two years with around 120 built.
Riley's successful 9hp engine and fitted into a short chassis of
7'6". the Imp proved to be a very adept competitor on race circuits
and rallies. At the 1934 24 Hours du Mans. all three Imps finished
with the works entry finishing 6th overall and 2nd in class. ahead
of more powerful Bugatti's and Aston Martin Ulster's. The lines and
profile are exquisite and typify the hand-penned craftsmanship of
the period.

This skilful tribute presented here today started life as an RME
saloon in 1954 however. the major change took place some 50 years
later when the vendor. an accomplished mechanic in his own right. br/>acquired the now. very down at heel. chassis and what remained of
the body and began the painstaking and exhaustive process of
stripping down. making good and rebuilding the car into his
interpretation of his favourite sportscar. the Riley Imp. His
attention to detail was meticulous and the build took until 2009 to
complete. some five years. The front and rear wings and boot lid
are indeed the real thing but other items have the original RME to
thank. The high quality interior is custom made and STC of Seaford
painted the car in striking red. As the entrant to many local
classic car shows. it is no surprise that it often walked away with
top honours such was the finish. presentation and attention to
detail. Splendid motoring for the summer months. ﻿