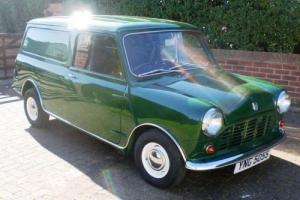 For sale by auction on Saturday 06 June 2015 with Historics at Brooklands. Brooklands Motor Racing Circuit. Weybridge. Surrey. Call 01753 639170
The original Mini is considered a British icon of the 1960s with
its space-saving. front-wheel drive layout. allowing 80% of the
car's floorpan to be used for passengers and luggage and was voted
the second most influential car of the 20th century. behind the
Ford Model T. The distinctive. two-door vehicle was designed by Sir
Alec Issigonis and was manufactured at Longbridge and Cowley
plants. The Mini Mk. I had three major UK updates; the Mk. II. the
Clubman and the Mk. III. Within these were a series of variations
including an estate car. a pick-up and a van. Initially. Minis were
marketed under the Austin and Morris names as the Austin Seven and
Morris Mini Minor until Mini became a marque in its own right in
1969.

This fully restored Mini 1000 van was first registered in June
1978. to a Mr. Sargeant in Denver. Norfolk and sold by Lovell's
Garage. As evident in the service passport. Lovell's Garage
serviced the original car annually until 1982 at which point. it
had covered 24. 32 miles. Lovell's then sold the car to a Mr.
Harman which is where the history. unfortunately. falls away.
Purchased again in 1988 by its now keeper with the intention to be
a lovely first car for his son. the Mini underwent a full
restoration. including engine and interior. complemented by a bare
metal re-spray in Brooklands Green. Disappointingly. the vendor
went to these efforts. only to realise. upon insuring the vehicle. br/>its commercial status was not cost effective for a 17 year old. The
quality is extremely good and the van today is as good as it was
when the restoration was complete. Along with the vehicle. the
original Service Passport. Driver's Handbook and a wealth of old
MoT and registration documents can be found. tracking the ownership
of the little motorcar. meaning this example would make a fantastic
addition for a mini connoisseur or perhaps even as a PR/marketing
tool.