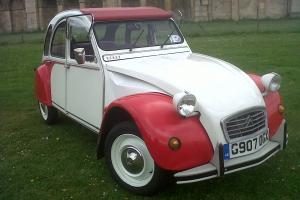 A very rare and extremely desirable Citroen 2CV6 Dolly in gleaming white and red which has been virtually garaged all its life and has been presented in a stunning condition. This car MUST NOT be mistaken for an average 2CV as it has only covered under 10. 00 miles!!!!!! It was bought by a retired lady in 1989 and used occasionally to potter around the town and shopping. In 2004 it was sold to a guy from New Zealand with only 4600 miles on the clock (MOT records to prove). He used it for 2 years and covered some 6000 miles in that period. He wanted to take her back to New Zealand but reluctantly had to sell it. In 2006 she was purchased by Jane who bought her so that her young daughter would inherited her when she turned 17. The car was fully serviced and waxoiled and put into storage in a heated garage and put on SORN for a further 5 years. When her daughter turned 17 she bought a saxo! so Dolly was reluctantly put on sale.

I have owned her since 2011 and carried out the following;


The car is now presented in its true original former glory with no rust on the chassis or floors as you can see in the pictures. She is absolutely stunning and turns heads wherever she goes. Unfortunately due to ill health I am selling it and want her to go to a genuine collector or enthusiast who will appreciate her. £9. 95 only!