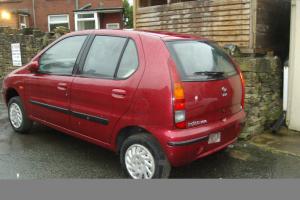 Here is a rare and unique opportunity to own one of the last Rover prototype/development cars. In the last years of Rover they needed a small hatchback to replace the Rover Metro. With funds tight Rover Went To Tata in India . the current owners of Jaguar Land rover; Tata already had a small hatchback available called the Tata Indica.
http://en. wikipedia. org/wiki/Rover_CityRover
Rover bought a small number of these for research and development to bring this to what would be sold in the Uk as City Rover from late 2003. The Tata Indica here is one of these cars purchased by Rover for development work. I believe the car was manufactured in February 2002 going by the vin number. There has been a number of modifications under the bonnet including a mock up airbox made from glass fibre.  The car comes with loads of spare parts too spare wiring looms cylinder heads air con compressor etc. The car has never been road registered and the mileage shows just 15 Kilometers or 10 miles from new. It still has the polyethylene on the seats. Having said that the car does not run and i have no idea why it does not run or what is required to make it a runner. The body does have minor marks here and there due to its many years standing. When Rover went bankrupt the receivers to over all the assets and remaining cars. Avery large Rover dealers bought a large number of the remaining cars from the factory some not completed cars including this rare prototype/development car. They held on to this quite some time before selling it on. I bought this car 2 years ago with great intentions but sadly i never got it out of the garage. So because of this i have decided to sell it on to someone else who hopefully can do more with it. I do have for an extra £200 a  34000 mile 53 plate City Rover that is taxed and tested and should have all the relevant parts to put the Tata on the road. The Tata has no paperwork but am sure all this could be easily sought and am sure there is alot more history about this car that is waiting to be found out. I was told this is the only remaining Tata from Rover. The others were just parts cars. Any questions please askViewing welcome by appointmentbid to buy not come later and haggle. Payment is cash on collection.  No zero or negative feed back bidders unless you contact me first

Can you get hold of a new Rover 75 from the field? Please advise.

from BOBBY, dated 23 august 2015
ahi, is the tata still available,lf so where are you ?