1956 Dodge Other Pickups for sale 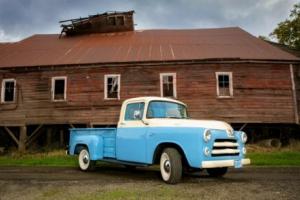 This is my personal, family owned Dodge Truck. Runs perfectly. I have videos of the truck driving if you would like to see them.

Engine has around 2,000 miles on it since the motor was rebuilt.

This truck has its original powertrain which contains the largest engine of the Functional Design era, A 270 Cubic inch V8 and a 4 speed manual gearbox. This 270 V8 was only offered from late spring of 1956 until October 1956 making this one of the last trucks produced of this era. Most of the truck was restored using the original parts, however a few pieces had to be replaced. Most visible of those, the tailgate and the wood in the bed. The engine was rebuilt, the front brakes were upgraded from the original drum to front disks and the clutch was rebuilt. Truck was fully disassembled and a meticulous restoration was done by 99 West customs in Monmouth Oregon from 2010 to 2017. Fully powder coated frame to handle the wet weather in Oregon and wiring setup for a trailer.

The history of this truck is pretty well known as it's only been owned by two families, neighbors. Officially a three owner truck, with the original owner buying it new as his farm truck in rural central Washington State. Fred, the first owner, was also the owner of the local country store where many people went weekly to pick up their groceries and catch up on the news. After many years of using the truck as a working farm truck, it was time to sell it. Fred sold the truck to another local orchard owner, also named Fred. There the truck helped pull out apple tree stumps, haul firewood, and perform other short errands to support the family. After the orchard was removed and the truck sat for a while, Fred handed the truck down to the current owners, his daughter Morgan and her husband Nathan. They spent many years restoring the truck and enjoying taking it to car museum meetups, or even to just go pickup groceries.

Now though, the time has come for this chapter of the trucks story to come to a close, and a new owner to enjoy and make new memories.

In addition to the truck,

The Hemmings Book Of Pickup Trucks

Pictures of the restoration