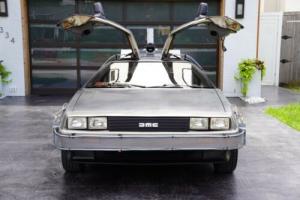 About this vehicleThis 1981 DeLorean DMC-12 is an original with updates to the exterior. The owner has had it for 1 year. The vehicle runs great.

This DeLorean Time Machine was part of the Barris Star Car Collection. It has been autographed by the late George Barris and it wears the Barris crests and Dash emblem. The dash, flux capacitor and other components on the car illuminate. Only one screen used time machine has ever been released by Universal Studios and it sold at auction in 2011 for $541k prior to restoration. This promotional time machine is one of the earliest non-screen used time machines ever built, with its ties to the Barris Star Car Collection it has a rich history. Over the years this car has drawn tens of thousands of people to the museum and gain us hundreds of thousands of dollars in free media value. It is one of the most favorite and iconic TV & Movies Cars to exist. It does run and drive.