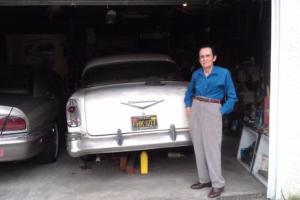 Original. relatively untouched. 1957 Chevy Bel Air Sport Coupe purchased from the original owner ('Mr. V') in December 2012. 'Mr. V' bought the car in 1956 and drove it until 1966. when he pulled it into his garage. never driving the car again. although he licensed and insured the car every year from 1966 until I purchased it in 2012.   Within 2 days of owning the car. I had the car up and running.  It starts easily and runs great.

The car is a total throwback to 1956. The upholstery is original. as are the body panels. interior. radio. chrome and paint. I even have the worn. original black mats. The paint is a solid. India Ivory; the interior is charcoal pattern cloth with ivory imitation leather.   Some of the upholstery on the front seat is worn through.  The original plates have been restored and are on the car.  The car was built in Los Angeles and delivered to a Los Angeles dealer. where it was purchased by Mr. V.  Having spent its life in Southern California. this car is a remarkable example of a rust-free car.

I have included photos of the car with Mr. V in the 1950's (with his niece. who actually helped Mr. V sell me the car) and also on the day I purchased it from him. when he was 96 years old.
The car runs beautifully.   Everything is original. including the parking “whisker” and radiator bug screen.

I have some original paperwork and booklets. including a statement from Mr. V about his ownership of the car.

You will not find another original '56 Bel Air Sport Coupe like this.  It is truly one of a kind.