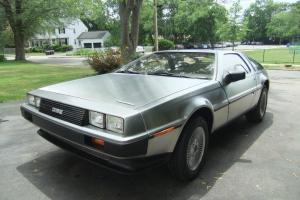 No Reserve Auction with a Buy it Now.   Update see link to 72 more photos below

This is not just any DMC-12 but one reborn by DMC Texas with an awesome High Performance Stage II engine and only 444 miles since.    You must hear this car and see it drive so watch the video.   This is not just a regular DMC-12.

It was just washed so that is why the driveway is damp under the wheels.   There are no leaks etc.

It was finished in July 2005 and made new with upgrades including:

The car was purchased in January 2010 and now has only 444 miles on it almost three and a half years later.

Since its rebirth it has been stored indoors in a climate controlled environment until this month.

This car starts right up and drives as one would expect a car with 444 miles to.   There are of course no engine or coolant leaks just as you would expect from a 444 mile car.   The engine sound is magnificent.

This is your opportunity to buy a magnificent vehicle at a fraction of what it would cost to have another car with these options created by DMC.

I know of nothing wrong with this baby other than a scuff on the drivers side hood which can be seen in the photos and the black lower engine lid has a fiberglass crack where the catch is.   This is very common.   It stays up but it is weak so I use a rod to hold it up.   It could easily be repaired I think.   Not the louvers but the black engine lid.   The Louvers are fine.   Everything else works and looks as expected from a 444 mile car. little to no wear.   Come and inspect this beautiful car.   See the photos which show the condition as best I can capture it and the photo of the title which is in hand.

**added June 8th.   I was asked why it has California plates on it if I am in Mass.   These are novelty plates from Back to the Future.

These photos were all taken in the last 6 weeks

from Peter Skinner, dated 10 april 2018
Is this DMC still available for sale?
Thank you.


from Peter Skinner, dated 10 april 2018
Is this DMC still available for sale?
Thank you in advance for your response.