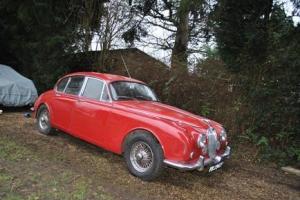 For sale by auction on Saturday 12 March 2016 with Historics at Brooklands. Brooklands Motor Racing Circuit. Weybridge. Surrey. Call 01753 639170
The lineage of the Mk. II can be directly traced back to its
predecessor. the 2. 4 saloon. or Mk. I as it would be
retrospectively known in later years. This sporting saloon. br/>designed to fill the gap in Jaguar's range between the XK sports
and voluminous Mk. VII. entered the market in 1956. Power came from
the legendary XK straight six. twin cam. engine in 2483cc form. The
2. 4 was notable as being a complete break away from the previous
designs of (Sir) William Lyons and Co. . and was their first foray
into the modern world of monocoque construction. Traditional Jaguar
buyers would not feel alienated by the new offering from Coventry
however as the interior was up to their usual standards with
leather and walnut being the order of the day. With 112bhp
available to the press-on motorist. the 2. 4 was not overly burdened
with pace so Jaguar's response was to come in the shape of a 3. 4
litre version. which was launched in 1957 to supplement its smaller
brother in their mid-size saloon range. As a result. 120mph was a
genuinely achievable pace. necessitating the introduction of disc
brakes a year later to keep speeds in check. Rather than introduce
a completely brand new car. Jaguar successfully re-designed the car
from stem to stern. and the Mk. II was born. debuting in 1959. The
chunky windscreen pillars of the early car were replaced by slimmer
offerings giving a much more airy cabin. which both improved the
styling and freshened up the design for the new decade.

In need of restoration. this 2. 4 litre. Mk. II Jaguar is a
complete car and offers any purchaser the opportunity to turn it
either into a useable example or a concours car. Sitting on wire
wheels and finished in red with beige trim. this automatic Jaguar
is supplied with a V5C registration document. With everything
appearing to be present and correct. this could be a great
summertime project.