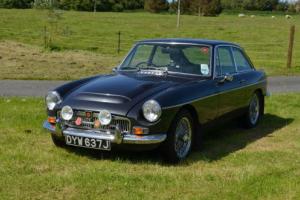 Fewer than 5. 00 examples of the MGC were made and all are now keenly sought after as they make excellent high speed cruisers.

First registered in October 1970. this particular car is one of the last ones made and looks most appealing in Gunmetal with cream leather trim. The accompanying Heritage Certificate shows that it was originally despatched in November 1969.

A photograph album shows that it was treated to an extensive professional restoration by Midlands Classic Car Restorations which included: a complete body restoration; full respray in Metallic Gunmetal Grey; complete rebuild of the original engine and gearbox including a new clutch; new tyres and chrome wire wheels. No expense has been spared to keep the car in top condition and over £20. 00 has been spent on it to date.

Several years ago an overdrive was fitted. fitting an exchange speedometer and a new clutch at the same time and more recently a rebuilt distributor and a rear axle overhaul which included new wheel bearings. seals and saddle rubbers.

Lovingly cared for. it has spend the last few years stored in a Carcoon when not in use. which will come with the car so that the lucky new owner can maintain the car in its current condition. MOTd and carrying a tax disc until June 2015. it is ready to drive away today.