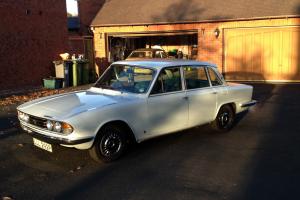 LLL292P is a rare and very original Triumph 2500TC which is presented in unusual ‘Ice Blue' coachwork with complementary ‘Ambla Blue Shadow' interior.

Supplied new by Mamos  Queensbury Ltd in September 1975 to Mr W R Marsland of Wembley. this charming car still sports the original dealer supplying number plates. tax disc holder along with the  service handbook wallet. sales brochure  and both the original sales order and invoice.   Mr Marsland part exchanged his 1966 Triumph 2000 and went for the optional extras of ‘Sundym' tinted glass. automatic transmission and ‘Endrust' treatment.   The car remained in Mr Marsland's ownership until his death in 1994. when the V5 was transferred into his brother's name (Mr C E Marsland) and it remained in his ownership until he passed away and the car was sold by his executors.   Therefore the two previous owners were related. and as the brothers lived in the same house. the car resided at their home in Vivian Avenue for the first 37 years of its life. until transferred to my ownership in 2012.

It is clear that Messrs Marland clearly had a soft spot for the old girl. and no expense was spared in maintaining the car throughout the period of their ownership.   There are numerous receipts for parts and services that span the 37 years.   The car was fitted with an automatic Kenlowe cooling fan (still in full working order) and a Kenlowe ‘Hot Start' which remains in the engine bay with plug in connecter under the dashboard.

Since new the car has covered 68. 00 miles.   The engine ticks over like a Swiss watch and the automatic gearbox changes smoothly.   The car brakes well and sits on 4 relatively new Goodyear tyres with original Triumph wheel trims.   The car has all of the original Triplex ‘Sundym' glass panels and all windows operate as they should.

The bodywork is good overall.   I believe that all of the panels are original as there are no receipts to the contrary and the paintwork is pretty much original with some cosmetic repairs carried out in the distant past.   The chrome work is very good. and every light works as it should.   Because the car has been garaged for its whole life. there is no fading to the black plastics.

The interior is totally original and is has been preserved to an excellent standard.   The ‘Shadow Blue' ambla seats are in excellent condition with no rips or tears.   The carpet is deep pile and has the original thick sound deadening underlay.   The filteration system and heater both work perfectly. The rubber inset mats and pedal covers are as new.   The headlining is in perfect condition but it is a tiny bit grubby in parts where the glue has started to show through – this does not detract from the overall appearance.   Everything works. including the clock. radio and the ‘Fasten Seatbelt' alert on the dashboard.   All gauges operate and the dashboard is still illuminated when the headlights are on.   Some of the wooden door cappings are slightly faded along the top. but I feel it would be a crime to re-varnish them as they have a certain 70's teak charm about them; they are in no way damaged or peeling.   On the rear parcel shelf is an internal radio aerial as the first owner did not want the wing drilled to accommodate an external one.   This works very well and is a real ‘period' feature of the car.   The boot carpet is in excellent condition and the engine bay is immaculate;  the underside of the bonnet still shows a sticker with information regarding the oil filter changes written by the previous owner.

The car passed its MOT with no advisories and I purchased 6 months road tax from December 1st.   The car had a full oil service in October this year. so she is definitely ready to drive away.   There are two full sets of original keys.

This is a very rare opportunity to own such an original and well cared for example of this once popular family saloon.   I really do doubt there is another so original and with as much history as this car has.   I would welcome anyone to come and test drive the car and look over her in as much detail as you like.   I am located in Solihull. between Junctions 3 and 4 of the M42.