1929 Ford Model A Phaeton for sale 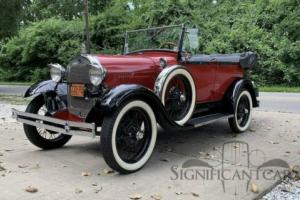 The Ford Model A (1927 - 1931) was the second huge success for the Ford Motor Company, after its predecessor, the Model T. First produced on October 20, 1927, but not sold until December 2, it replaced the venerable Model T, which had been produced for 18 years. This new Model A (a previous model had used the Model A name back in 1903) was designated as a 1927 model and was available in four standard colors, but not black. Prices for the Model A ranged from $385 for a roadster to $1400 for the top-of-the-line Town Car. The engine was an L-head 4-cylinder with a displacement of 201 cubic inches . This engine gave the car 40 horsepower. Typical fuel consumption was between 25 and 30 mpg using a Zenith one-barrel up-draft carburetor, with a top speed of around 65 mph. It had a 103.5 in wheelbase with a gear ratio of 3.77:1. The transmission was a 3-speed sliding gear unit with a 1-speed reverse. The Model A had 4-wheel mechanical drum brakes. The 1930 and 1931 editions came with stainless steel radiator cowling and headlamp housings.

The Model A was the first Ford to use the standard set of driver controls, with conventional clutch and brake pedals, throttle and gearshift; previous Ford models used controls that had become out of date and uncommon to drivers of other makes. The Model A's fuel tank was located in the cowl, between the engine compartment's fire wall and the dash panel. It had an optic fuel gauge and the fuel was distributed to the carburetor by gravity. In cooler climates, owners could purchase an aftermarket cast iron unit to place over the engine's exhaust manifold to bring heated air into the cab. A small door could be opened or closed to adjust the amount of hot air entering the cab. Model A was the first car to have safety glass in the windshield.

This exceptionally well restored Phaeton was restored with an eye toward Touring. The car has a rebuilt motor with a high compression finned head, 4 Speed OD gearbox, Heavy Duty Clutch, Hydraulic Brakes, Zipper Electronic Ignition, a 12 volt conversion, Turn Signals, Full Instrument Panel, and a CB Radio just in case all that won't get you to your destination-or just for fun really. Finished in a desirable Red/Black Color combination, the car features Dual Side Mounts, Wire Wheels, Stone Guard, Wind Wings and Motometer. The car runs and drives perfectly- I would not hesitate to set off on a cross country jaunt tomorrow in this car. I don't get to say this very often with a car of this vintage but if you are up for it you can fly in and drive this car home!