1989 Jaguar XJS 3.6 Recently been Completely Rebuilt from front to back.

1989 Jaguar XJS 3.6 Recently been Completely Rebuilt from front to back. for sale 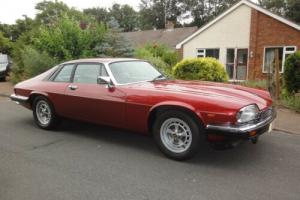 Jaguar XJS 3.6 1989 over the last 18 months this car has been rebuilt from the back to the front. All the rust on the under side and lower quarter of the car has been cut out and new steel welded in although there was not that amount of rust to start with and certainly not as much as some XJS I have seen, I have pictures of most of this work.

The rear axle cage was removed, stripped, cleaned and painted, the LSD differential sent to Simply Performance Jaguar Specialists to be rebuilt with new bearings and seals, at the same time the gear ratio was lowered a small amount to give slightly improved performance and drive-ability, the rear inboard discs, pads and hand brake pads were replaced and the calipers rebuilt, new wheel bearings, coil springs and Gaz adjustable dampers fitted.

Next the front cross-member was dropped, again it was stripped, cleaned and painted all rubber bushings renewed, new springs and Gaz adjustable dampers, new wheel bearings and brake discs and pads with overhauled calipers the steering rack had new seals, boots and track rod ends, the front and rear suspension castor and camber angles have all be set correctly using new adjustment shims.

The engine and gearbox were removed together, the automatic gearbox was sent for a full repair and overhaul by Stephens Automatics of Hertfordshire, the engine was then stripped and given a full overhaul with machining work being done by Ivor Searle of Soham and the engine was rebuilt by my self using parts supplied by FW Thornton and SNG Barratt.

The whole air conditioning system has been renewed and updated including the evaporator and heater matrix inside the climate control unit and the system will happily run on R134a gas, all parts supplied by Fen Air, air conditioning specialists.

The interior has been refreshed with new wood veneer and a slightly smaller steering wheel which makes the steering lot more responsive it also makes it easier to get in and out of.

All of the rubber fuel lines have been replaced and it is now fully compatable with E10 petrol and higher, the lower reserve tank has also been removed and cleaned out.

It has a full stainless steel exhaust fitted and supplied by AJ6 Engineering this has improved the engines performance a bit it also sounds better, but not too loud.

The original wheels when I got the car four years ago were Lattice alloys which practically every XJS from this era seems to have, so I have changed them for the Kent alloys I believe they were an earlier option for the XJS which I prefer and are much easier to clean, the tyres are Falken ZE310 225/60 R15. I still have the old wheels and they can go with the car if wanted but they really need to be refurbished.

The XJS drives extremely well and will cruse a the speed limit all day long and goes round corners, I won't say like it's on rails as it is to heavy for that but with it's improved springs and dampers it has lost a lot of the wallow that it had before and it can be driven comfortably at speed round the twisty bits.

The only two small problems are the engine uses a small amount of oil which I think will stop as it does more miles, since the rebuild it is already using less than when the engine was first run and it has only done  800 miles since the rebuild. There is a small rust bubble on the front of the drivers side front wing just above the headlight which was there when I got the car, I have removed the headlight and have painted and treated the underside with wax-oil and it has never got any worse in my ownership and nobody else except me seems to notice it.

I am only selling the car as I have four other Jaguars from the 90's - 2000's which all need my time and money spent on them.

Thank you for taking the time to look at my Jaguar XJS.

If you have a question please email me via eBay.