1990 AUSTIN MAESTRO VAN. As seen on TV in Albert Square. A Classic!!

Seller's notes: No Mot as been in storage since the role of this van was replaced. It starts, stops,runs and drives quite well for its age but need cosmetic attention. Previous owner the BBC.

1990 AUSTIN MAESTRO VAN. As seen on TV in Albert Square. A Classic!! for sale 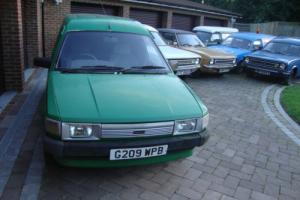 COULD IT BE FAMOUS ??
This little Austin Maestro van was previously registered to the BBC.  Please do your own research as no evidence comes with the portfolio. except the V5C showing the BBC and the fact I bought the van from a company that supplies cars to the film industry. however. "aledgedly" this van was used in Eastenders by the Fowlers as a green grocers van for quite a few episodes.
Well. with Boycie's Jag making 115k recently at auction and the Minder cars similar money?????. this could be a snipet at the £750 starting price that I am asking with No reserve.
The van is on the button. A bit of a blow on the exhaust but actually drives reasonably well. Bodywork needs attention (as photographed) and I am selling as spares or repair due to no mot and general condition. The van has been parked for a while as the back doors are very stiff to open. I don't know when it was last used on the set as I personally don't watch the program. The mileage shows 63412 and nearly every previous mot is within the folder. hence confirming the low(ish) mileage.
As evident by the background photo's. I am a collector of cars and especially early Austin (predominately Marina) Vans. I have too many and I'll never get round to restoring this van and just thought that If the history is correct. this van could be a lovely little entry level into the classic scene for someone for not a lot of money. Cash on collection preffered etc etc. Please see some of my other items I may have listed in an endeavour to reduce my collection. Thanks for looking.

Is there any major areas of rust on the van? Where are you based in the country.

from mark wint, dated 13 november 2017
hi is this van or one similar still for sale