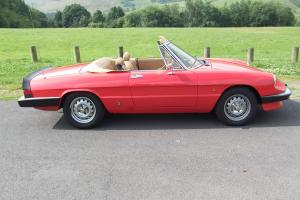 This is s superb Alfa with no rust. It has been a summer toy (SORN'd in the winter months) and hasn't seen rain for at least 8 years.

A bad back and dodgy knees are making it difficult to drive (no power steering and long throw gears) I have owned the car for a couple of years and bought it generally in the condition it is in now.

It's a 1985 ( C ) car and has a personalized number which reads  “ALFA UK” at a certain angle!! which will come with the car. It's an early S3 so S3 on the outside but the much prettier S2 on the inside (twin binnacles and wind up windows etc)

It's a Bell & Coalville supplied RHD car which was sold to a lady from London who lived in France. It's always been UK registered but there are some French receipts.    The car registers in KM but the speedo reads in MPH. The clock reads 132. 00km which is just over 82. 00 miles.

Mechanically the car is excellent with none of the problems referred to in other adverts (no dodgy 2nd gear etc) The previous but one owner had the gearbox rebuilt and it really is smooth and positive.   The carburetors are twin Solex and Ive had them set and the engine tuned since Ive had it. All tyres. discs. pads etc in first class order (new front pads and tyres). The wheels are original with stainless “Alfa” spinners and the steering wheel is an original “Hellibor” with matching gar knob.

The car was re-trimmed in “Connolly” leather; new carpets and repainted in 1999. The work was done by W. A. Dick of Wolverhampton (if you know Alfas you'll know them)

The hood is in good condition and is a replacement for the original and the rear window is clear and not cracked.

The bodywork is superb having been re-sprayed in 1999 - it's probably better than when it left the factory! There is absolutely no rust on this car – the wheel well was replaced a few years ago and the underside was “Waxoyled” two years ago which required the removal of most of the interior. All of the panels are original – if you look inside the doors and behind the hood housing it's like brand new and all of the wheel arches are crisp and clean.

The car will be sold with a new MOT and 6 Months tax and is ready to go.

On agreement of sale a 5% deposit will be required with the balance on collection. This vehicle is on sale elsewhere and if sold we reserve the right to withdraw from this auction.

from Bryan, dated 19 september 2017
Is your Alpha sill for sale?