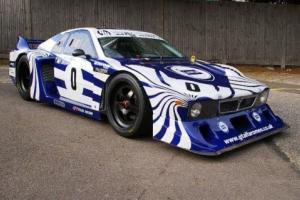 For sale by auction on Saturday 29 November 2014 with Historics at Brooklands. Brooklands Motor Racing Circuit. Weybridge. Surrey. Call 01753 639170
From 1976 to 1980 the Group 5 World Championship took place and
subsequently became the World Endurance Championship in 1981 and
1982 finally being replaced by the Group C category in 1983. The
Group 5 category produced extraordinary racing cars from the likes
of Ford. with the wild Zakspeed Capri and the iconic Porsche
935/78. However. the most successful of the series was Lancia with
the Beta Montecarlo Turbo. Group 5 was essentially a silhouette
formula with two classes; up to 2000cc and over 2000cc. The Lancia
Montecarlo ran up the class courtesy of the 1. 4 litre 16 valve
engine which was turbo charged effectively giving the car an
equivalent of 1995cc

Fast forward 35 years and we are delighted to offer this
extraordinary recreation of an original Lancia Beta Montecarlo
Turbo. To produce this motor car was somewhat of a challenge. The
original moulds were located in Germany but permission to use them
in its creation was denied. To progress the project. drawings were
taken from a very detailed 1:24th scale model. Once completed by a
specialist who created accurate TV models the car was found to be
only millimetres in difference from the original. An invitation to
take pictures and measurements from an original car in the Lancia
Museum in Turin also enabled an accurate chassis to be
manufactured.

A rust free 1978 Beta monocoque was prepared and sent to the
specialist company 'Rollcentre' for fabrication of the safety cell.
The rear uprights were fabricated as the originals were cast. Wheel
sizes were finally determined at 10x18 on the front and 13x18 at
the rear as the original sizes were difficult to find. Due to the
larger front wheels to the original. some slight changes on the
front of the body were necessary resulting in bulges above the
front wheels; these certainly create a distinctive look rather than
the slab profile of the original. Sitting behind the driver is a
2. 0 litre 8v Integrale turbo engine with mapped ignition chosen. br/>rather than an original 1. 4 litre Beta Turbo unit. for cost
effectiveness and reliability. The engine has been built using
Arias forged pistons. removed balancing shaft. a dry sump
lubrication system a Garrett T35 modified turbo charger. 4:2:1
stainless steel exhaust manifold. Kent cams. large valves. bench
flowed cylinder head. modified Thema inlet manifold (eight
injectors) and a Pectel 6 ECU with data logging. This results in
the Integrale unit producing in the region of 300 bhp. The drive is
via a Lancia Thema five speed gearbox with an aluminium flywheel
and Tilton clutch assembly. To bring the beast to a halt. Brembo
callipers with equally large 12 inch AP Racing discs are fitted.
Adjustable Koni shock absorbers with MacPherson and Chapman struts
dominate both the front and the rear of the chassis.

With. in the region of 300 bhp on tap and with this monster only
weighing in at around 900kgs. expect a mind blowing experience
whilst experiencing what it must have been like during an era of
racing that produced extraordinary motor cars.

Please note: The vendor has stated that included in the sale (if
the purchaser requires it) is a 1999 DAF truck with purpose built
tail lift for transportation of the Lancia. The truck may require
some re-commissioning; however. we are assured that the mileage of
around 22. 00 miles is correct and the DAF drives extremely well.
It may also be driven on a normal car licence. The successful
bidder will also need to collect the vehicle from the vendor's
premises if they require it. Please contact the Historics office
for full details. ﻿

from Henk Gadellaa, dated 10 february 2022
Hello, like Jeff, Dale and Chris, I would like to know if you still produce parts or can help me with technical questions to build such a car
Thanks foor your efford

from manuel, dated 06 august 2020
Do you still have it for sale? I'm interested
where is the vehicle
has a FIA passport to compete
What engine does it carry, power?
how is the car in general
You can send detailed photos of all parts and engine and documentation you have to my email
mmestrada@andorra.ad
I wait for news
regards
Manue

from jeff griffin, dated 08 may 2020
Hello
I would like to know if you still have the molds and would you sell a body?
Thank you

from Dale Palkowski, dated 11 march 2015
I am looking for Group 5 body parts. Are you producing any more from your molds?

from Chris Cardinal, dated 24 february 2015
Hello. I would like to ask you a few (perhaps many?) technical questions regarding your car, as I am interested in building one as well to campaign on the vintage racing circuit. Would you allow me to make body parts from your moulds?

Please feel free to contact me directly on cscardinal AT live.com