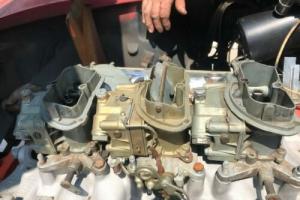 Up for sale is a very unique car, a.n original 427 400hp, power steering power brakes, telescoping steering 4 speed car.  On top of that, it is a coupe.  GM produced less coupes with the 427 tri-power than convertibles in 1968.  This car has been in deep storage for a long time.  The car was last titled in 1971.

I am helping a fiend sell it.  He purchased it with the intentions of rebuilding the drive train and driving it.  However, the prior seller wasn't very honest.  The car needs a restoration and that is more than what he was willing to deal with.

The engine looks real clean under the valve covers.  I am impressed with the carbs.  They are is super nice shape and the printing is still on them.  I looked for the numbers on the transmission, but I think they are stamped on the top.  I can tell it hasn't been switched out recently.  There is plenty of road grime on it.  Same goes for the rear end.  Looks to be original.

There are some parts missing.  I will list what I know.  Going from the front back.  There is no radiator, fan shroud, and fan.  The linkage is missing for the carbs and the distributor is missing too.  I did not see a coil pack under the front cowl.  So, I am thinking it came with a standard distributor.  The calipers are missing.  The front right hood hinge is damaged on the underside. The interior looks complete, less the carpet.  Last, the gas tank and gas cap is missing and so is the spare.

The pictures tell a lot about the car.  I have 50 pictures on my google drive, so if you want to look at them, you would need to text me and I will send you the link.

The million dollar question is the frame.  It is real nice on the passenger side, up front and the back, but the drivers side has issues, the rear corner (under the seat) has some rust and so does the center section between the two sides.  Otherwise, it is nice.  If you had parts, you could cut it out and weld it, but these frames are pretty easy to come by.  The other objection to address would be the doors.  They should be replaced.  The skins are fine and look good from the outside, but the frames are rusty.

This is a pretty valuable car and worth restoring.  I have a buy it now and a reasonable reserve.  If the car meets the reserve, I will not sell it outside of the auction.

Give me a call and I can address any questions you may have.

The car is sold "as-is".  Clean open title.  I reserve the right to sell it locally.  A $200 non refundable deposit is due from winning bidder.