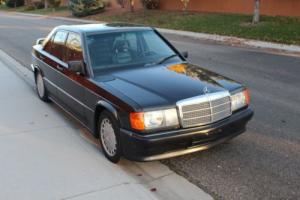 UPDATE: I GOT A LOT OF FEEDBACK ABOUT THE WHEELS HAVING CLEARCOAT FADING. DUE TO THAT I WILL PUT ON A PERFECT SET OF WHEELS FROM MY OTHER MERCEDES.

Below is the posting from the Original owner (the gentleman we purchased from):

"An AMAZING opportunity to buy an early. Euro model Mercedes-Benz 190E 2. 3-16 Cosworth at a very reasonable price. This is a local Minneapolis car with just over 63. 00 original. one owner miles. The car was purchased by its only owner. the man who owns the car today. in Germany. in 1985 (before they were available in the U. S. as U. S. spec cars. 5 speed manual Getrag transmission and the tuned Cosworth engine.

Read the complete description below. contact info for the owner is below:

Mileage note: The actual mileage on this vehicle is 2. 00 miles LESS than recorded 63. 50 miles. on the odometer. When the car was converted to DOT/EPA requirements. a new odometer/speedometer. in miles. was installed. Instead of converting the then 6. 00 kilometers on the car. to 3. 00 miles; the conversion company set the new speedometer to 6. 00 miles. It would have been more of a hassle to change it back than it was worth. This is more of a conversation item. I guess.

EPA/DOT conversions and certification by Classic Motors. Westmont. IL – completed 12/1985 Classic Motors was the AMG licensee for the Midwest. before Mercedes purchased AMG

The car has been stored in a heated garage. in Minnesota. since new. It has seen frequent summer driving until 1994. then sporadic summer use since 1995.

Service has been performed by Sears Imported Autos. the local Mercedes dealership. Most service receipts are available. Some oil changes. and recent service. has been done by my trusted. local garage: Steve's Tire and Auto in Minneapolis. They have done service work on my Amphicar. and other vehicles. for many years.

The spare tire is the original Pirelli P6. on the original wheel. It has never been used. or even removed from the trunk. Original jack. handle and tool pouch are in the trunk.

A new. in the box. front hood ornament is included. It has not been installed yet. but shown in the photos.

A new windshield was installed at aprox. 62. 00 miles.

Since this is a Euro spec car. it may not have the same accessories as found on an American spec car. The engine has a higher horsepower output than the American version. Since I have never driven another 16V. I cannot offer a comparison. Euro vs. American. but. from what I have read. the Euro version is somewhat quicker. I believe the Euro puts out 185 bhp vs. 167 for the American version.

Optional Factory Installed Accessories: These may or may not be standard on an American spec. car. but were not standard on Euro models. I specified these on my order for the car in Germany. Heated front seats – power front seats with memory (both sides) – power right side mirror (left is manual. with an interior knob) – heated mirrors – power antenna – power sunroof – front and rear headrests – central power locking – antilock brakes – a/c – electric windows (4) – rear window defroster – auto leveling hydraulics – English and German owner's manuals – rubber floor mats

Unfortunate hail damage was sustained in 1998 – the paint is not chipped from the hail. so dentless removal would likely work just fine. except on the rubberized rear spoil. which needs repainting. There are also some door dings. fine scratches. and other wear and tear to the original paint. The hail damage consists of APPROXIMATELY 11 trunk dings. 20 roof. 6 hood. and numerous dings on the rubberized rear spoiler.

There is a “ding” next to the driver's side window. in the B pillar window frame. This was caused by someone trying to break the window with an unknown object. They eventually succeeded. The window is no more than 3 years old. The metal damage is visible in one of the photos of the B pillar.

The dash has three or four cracks. as is common with this era of Mercedes – a dash cover would most likely cover these completely. since they are all on the horizontal surface. and not all that noticeable.

The driver's seat has some leather surface color wear on the left (as seated) edge. from driver entries and exits. Other seats are in near excellent shape.

The a/c blows as cold as it ever did; but. being a black on black car. it never got cold inside on a hot. humid summer day. unless I am on the highway for some time. This isn't a wear item. just a declaration.

The clock has stopped working. probably from sitting. unpowered – no attempts have been made to repair it. It probably just needs some oil and a nudge.

The original wheels have some clear coat peel happening. It isn't really a peel. but a disappearance of some of the coating. leaving a somewhat mottled look to the silver wheel finish. This is primarily on the front wheels. There is a photo of each wheel in the PDF photos.

An Alpine. after market. security alarm was installed. but was disconnected many years ago. It is still in the car. and could probably be reactivated by an auto electrician. (the manual and remote are included)

The car does not have cruise control. It was illegal in Germany. and not available to order. at that time.

There is not an airbag on this car. It was not available. at the time. on the German model. although the cars that were sold by Mercedes. in the US. a year later. did have airbags.

Minnesota had an annual EPA emissions testing program until 2000. This car passed the testing. on the first test. each year. Each annual inspection report is included.

The car has always started immediately after sitting in a heated garage all winter; which in Minnesota means from October to April or May.

This Euro version of the 16V has about 15 more horsepower than the US version. It is fast.

The Mercedes is fully functional and serviced. ready to drive. "

In my time of owning it. nothing has changed. I replaced the hood insulation due to old age. Interested parties can contact me directly @ 253 397 9173. Local buyers are welcome to come and test drive. 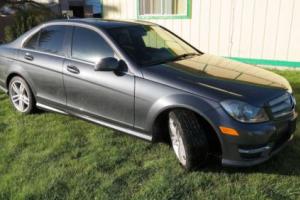