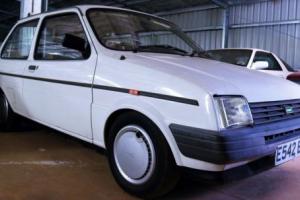 ONLY 10. 613 MILES FROM NEW. OWNED BY THE PROVERBIAL LITTLE OLD LADY – 13 MOT'S (ANNUAL ROADWORTHY) CONFIRMING THE MILEAGE – OFTEN ONLY A FEW HUNDRED MILES COVERED EACH YEAR.

The Metro was introduced in 1980 to replace the Mini. & had a modernised body complete with Hatchback. In fact the Mini stayed in production & the mechanicals were shared until a range of new engines in 1990. So the 1980's Metro has the most authentic feel of a Mini. even down to having Hydrogas suspension – a development of Hydrolastic.

Imagine the value of a 10k mile Mini? The Metro feels & performs exactly like one. from the steering to the engine. it is entirely the same experience. Princess Diana had one before she married.

It has plenty of paperwork. in addition to the MOT's. it has various receipts + owner's handbooks. NOTE that the car is a private UK import & has never been registered in Australia.

The interior & dash look & feel as new. with no wear on the switches.

Bodywork: has survived the English climate very well – due to its lack of use. There are a few rust scabs (brush-touched) plus slight corrosion to the driver's door base. RH front sill & around wiper arm.

This is a cute city car with simple mechanicals. so despite being 30 years old (& eligible for registration &/or club plates in any state) could be a practical option as a daily driver.  A copy of the FORS import permit will be provided & Australian Compliance is still required.

Note that the speedo reading is in MILES. It will need a NEW BATTERY.

SUMMARY: These are now very collectible in England & regularly feature in club meetings & magazines. With UK shipment costing $3000 alone. before import fees & GST. you are buying below replacement cost. even if you could find one with this tiny mileage.

Please note where it is – Crookwell NSW which is 45 klms west of Goulburn. which in turn is 2 ½ hours south of Sydney. Clearly it is not registered so you will need either a trailer or transporter to collect. Please consider this before bidding.