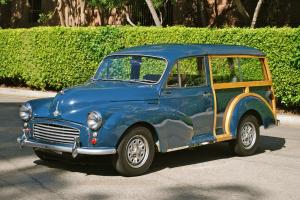 The Morris Minor was released to critical acclaim at the Earls Court Motor Show in 1948. Designed under the leadership of Alec Issigonis of Mini fame. more than 1. 3 million were manufactured between 1948 and 1972. Initially available as a two-door sedan and convertible. the hugely successful car's range was subsequently expanded to include a four-door saloon. panel van. pick-up truck. and a wood-framed station wagon. or estate. the Traveller.

The Traveller featured an external wooden structural frame. in ash. for the rear bodywork. with two side-hinged rear doors. The frame was varnished rather than painted and a highly visible feature of the body style. similar to the American “Woodie” from most of the U. S. manufacturers.

The car offered here is a bit of a sleeper. however. The A-series 1098cc engine has been replaced with an 1800cc twin-cam engine from a Fiat 124. together with the 5-speed manual gearbox. In standard trim. the Traveller could boast 48bhp. Now. this diminutive British icon produces 116 bhp. propelling the car with far more modern performance figures. It's a blast and sounds the part too!

The professionally performed engine swap was undertaken several years ago. with great attention to detail. including Morris-badged cam covers. The exhaust is routed through a twin box system to deliver a nice. throaty sound. and disc brakes at all 4 corners are served by a booster for modern stopping power. Suspension upgrades include converted tube shocks and thick front and rear sway bars for great handling. The build included a full rewire of the electrical system with modern style fuse and relay panel. a great improvement over the original Lucas system.

The engine starts easily. idles well and has great responsive power. The clutch is excellent. and the car shifts well. though 3rd gear synchro is a little weak. Brakes. suspension and steering are great. The wheels are scuff-free and shod with good tires with plenty of tread remaining. To ready the car for sale. it has just been fully serviced and a new battery installed.

The interior is in good condition. The freshly restored reclining bucket seats are a departure from the original. as is the Mountney steering wheel. A full array of gauges. including ammeter. tachometer. and oil and water temperature. have been nicely installed behind the steering wheel. complimenting the center speedometer. The pedals are top-hung - a very nice upgrade – and the green light on the end of the indicator stalk is fully functional. The original door panels are in good condition. as is the rear seat. The carpet is in perfectly reasonable condition.

Paint and body on the car are fair to good. The all-important wood is in good. solid condition. Subject to an older repaint. it is showing wear. though the finish is consistent. There is no evidence of accident damage or repair. The body is generally rust-free. but the bottom of the door's outer surface is showing some rust bubbling through. The floors. sills. and rear wheel tubs are solid as well as all other panels. There is rust in the rear valance. though it looks to be an easy repair. It could be a rolling restoration – drive it as is. or restore it as you go.

All in all. this is a fantastically fun bit of iconic British design with the heart of an Italian sportscar. How can that not be a blast to own and drive. It gets waves and appreciation everywhere it goes. with a little surprise under the hood. 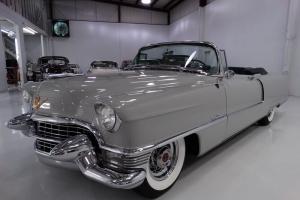 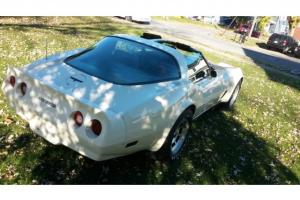 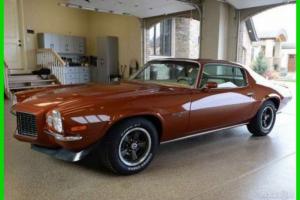 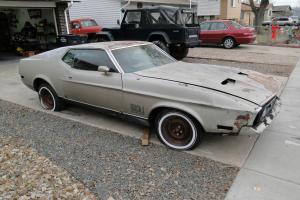 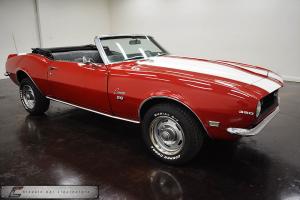