Triumph TR3A in Driver Condition NO RESERVE for sale 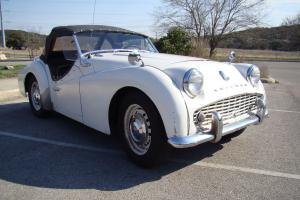 I came to know of my TR3A several years before I purchased it.   The Triumph resided in rural Texas where it had been off the road for some time.   The previous owner's son relayed that his mother had taken the car as part-trade in a real estate deal when one of her clients moved from California to Austin in the 80s and used it on the back roads near Kingsland Texas until it started to “give her some trouble” whereupon it was retired to the family's carport in 1992; the Texas state inspection sticker from that year still on the windshield.   The lady owner died in the intervening years and by 2008 her son wanted the Triumph out of his way so he contacted the local Triumph club of which I am a member.   Due to the owner being a bit optimistic regarding the car's value. that contact failed to find a buyer.   In 2010 I finally purchased the car.   I thought then and still think the Triumph is in remarkably good condition considering.

My goal was to preserve the Triumph in as-found condition. and cosmetically at least. that is pretty much what I have done.   I love the fact that every panel and fixture tell the story of the car's life.   That said the re-commissioning was more costly and involved than I had hoped owing mainly to the fact that the engine was frozen (and after weeks of coaxing simply would not break free) and the extended period the Triumph was off the road.   I decided the only proper recourse was a full rebuild of the engine and a gearbox.   I'm leaving out many. many small items but here is a list of jobs done to return the car to reliable driver status.

I have receipts for all the parts and labor totaling nearly $5300 that come with the car.

After approximately 1000 miles of use over 4 years I can report that every mechanical and electrical system on the car functions well with the possible exception of the windshield wiper motor which I have never connected.   The car drives beautifully with precise (for a TR3!!) steering. great power from the engine. and a faultless gear box.   The brakes pull straight and true and work extremely well.   The wiring is generally good.   The cloth sheath has largely fallen to bits. but the plastic wiring and connections are in good shape considering their age.   The body condition is a mixed bag.   The paint is old and variable. appears to be mostly. but not all original. with numerous chips and wear spots down to. and in many cases through the primer where surface rust has formed.   The areas of more serious rust is confined to the lower sills just in front of the rear wheel wells and just starting around the windshield posts.   These would not be difficult to repair as the damage is just not that extensive.  There is a softball-sized metal patch in the passenger side foot well.  The rest of the underside is outstanding with no signs of rot whatsoever including the frame. inner sills. trunk. and spare tire compartment.   The driver's side floorboard is perfect.   The critical area under the rear seat is perfect.   I have included photos of the problem spots on the body as I want to be as honest as possible about the car's condition.

Rarely. are you lucky enough to find an old car that has been pampered its whole life.   This is not one of those cars.   Its condition is well worn and honest and that makes it rather unique.   I can report that it gets a lot more attention at British car shows than the shiny restored examples!   I've driven several TR3s over the years and I really can't say enough about how well this one drives.   It is a very unique survivor in that it can be used and enjoyed as-is or would make a fantastic candidate for restoration either now or someday.

NO Reserve Auction.   If you bid you're bidding to win.   If you have less than 5 feedbacks. call me first or I may cancel your bid.    Please call BEFORE you bid with any questions (404)259 5764.   I'm more than happy to discuss the car with serious potential owners.