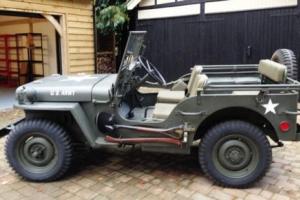 For sale by auction on Saturday 08 March 2014 with Historics at Brooklands. Brooklands Motor Racing Circuit. Weybridge. Surrey. Call 01753 639170
The Willys MB U. S. Army Jeep and the Ford GPW Jeep were
manufactured from 1941 to 1945. These small four-wheel drive
utility vehicles are considered the iconic World War II Jeep and
inspired many similar light utility vehicles. With America enduring
difficult economic times. the U. S. Army instigated a program to
modernise its fleet with a 'general purpose. personnel or cargo
carrier' especially adaptable for reconnaissance or command and
designated as a ¼-tonne. 4x4 truck. Ford Motor Company. American
Bantam Car Company and Willys-Overland Motors all competed for the
government contract and American Bantam were the initial winners of
the bid. However. the U. S. government were keen on standardisation
and Willys' production capacity eventually won them the contract;
unfortunately without implementing the better Bantam and Ford
features. Towards the end of 1941. Willys' facilities couldn't keep
up with demand so Ford were contracted to produce the Jeep through
to the end of World War II. From 1942-45. Ford produced 277. 96
Jeeps; however parts used on Willys' Jeeps and Ford GPW Jeeps are
completely interchangeable mechanically.

This Ford GPW is a genuine 1942 model having been restored in the
United States some four years ago. A detailed written restoration
log book is supplied confirming both the extent of the work and
also the quality of the workmanship carried out. In addition to
this. a replacement steering box has been fitted recently. It comes
complete with the original brass identification tags. although
reproduction ones are fitted to the vehicle. Supplied with a V5
registration document and a current MoT test certificate valid
until 7th August 2014. this Jeep is in excellent condition and
offers a number of interesting options to its new owner.