Bond Equipe 2 Ltr Coupe Last Out of Factory for sale 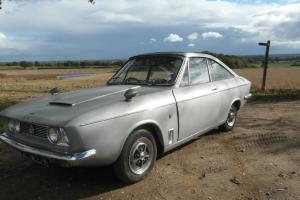 How often have you seen Rare Car. Not To Be Missed.

Well this listing is no different.

This Bond Equipe 2ltr Coupe is THE LAST CAR TO LEAVE THE FACTORY.

I saw this car on ebay and was very tempted but decided it was a car to far at that moment in time.

Later in the year (July 2006) it was listed again. this time I contacted the seller and a price was agreed. The seller informed me the car had not been used for 25 years. looked straight had not been chopped about and was surprised when it did not attract much attention first time around.

When checking the chassis and engine numbers matched the V5c I was surprised to find the commission number was the last 2Ltr Equipe  manufactured by Bond Cars. I have since been informed the car has been accepted as The Last Car To Leave The Factory as the later Bond Bug was produced by Reliant Cars.

When the car arrived it was on Dunlop SP tyres. had an alarm system which did not work with wire running everywhere. Britax window lifting system in a box. bunged up petrol tank. the engine was partially dismantled and there was the usual brake. clutch. steering bush and fuel problems.

Extensive work was carried out on the engine a stripdown & rebuild with various replacement parts as required  including head & block regrind.

A new front screen rubber will be required.

Front seats have the usual split found on 2Ltr Bonds where squab meets rear support (on door side exit point).

Paintwork is dull but you can shine on it.

There are areas of the car where primer undercoat can be seen. boot lid. bonnet. wheel arch as shown in photos.

A piece of trim between glass and body of oil pressure gauge has slipped and prevents ease of movement of needle although pressure is good.

Exhaust is stainless steel from end of front pipe to rear including box.

When driving a noise appears at approx. 45mph which would indicate a u/j needs replacing.

Appearance of car is very original and I have kept it this way. a new owner may wish to repaint it whereas I would prefer the natural ageing to continue.

Chromework is complete. undamaged and in good all round condition.

Bodywork is straight and without dents on steel doors. some crazing on grp. usual age related marks.

Interior is very good including door trim and dashboard. no rips or tears apart from the two mentioned previously.

Bonnet could do with a little tweaking to improve fit.

Chassis and underbody very good with only minor repair to side rail behind cill.

This car is not a concours vehicle. it is a vehicle which still requires some work.

I am happy with the car which shows its age while retaining a very tidy appearance.

Remember this car is THE LAST BOND TO BE PRODUCED. records show it to be the THE LAST OUT OF THE FACTORY. A PIECE OF BRITISH MOTORING HISTORY and as such its amazing after all these years is completely original.

Based near Spilsby Lincolnshire. viewing welcomed. would be willing to help with delivery.

Advertised elsewhere so may be withdrawn.

This is an honest description of an honest vehicle.

Is the car still for sale or Sold?