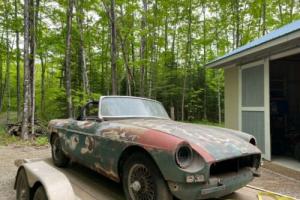 I purchased this 1964 MGB with the intent on restoring it. When I went to pick it up, I was asked by my parents if I wanted the family MGB. I grew up with that car and decided to restore it instead. The story behind the 1964 MGB is that the original owner past away and the widow gave it to the junkyard to crush. The junkyard thought it was to nice to crush and knew a man that had a few MGBs and sold it to him. It sat in that man's garage since the 1980's. He started restoring it and then lost interest so it sat collecting dust. This summer he had to remove his stuff from the property and I picked it up. He had no title for it and boxes of parts. Everything appears to be there, with extras. I have more pictures, but am limited to 12. There is one other rust hole not included in the pictures and that is a dime size hole in the driver's footwell. The original engine turns by hand, but I have made no attempt to run it. There is no gas tank in the car, but I was given two spare tanks. It looks like it was originally cream and the top coat is now blue. I don't see any bondo and everything looks original. From the story I got, I would be the third owner. The VIN number is 10825. This car does not have a title. There is no option on the listing for that. I would be willing to deliver it for a fee.