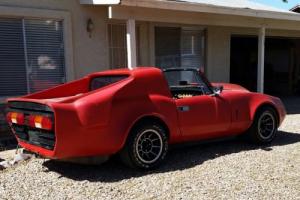 This is one very different Triumph Spitfire.  It draws a crowds of critics and skeptics. The attention is almost overwhelming. No one expects it to sound like it does when it fires. It sounds like it should be on a racetrack with only straight pipe mufflers. Most people guess everything but what it is and most everyone assumes it to be a kit car of some sorts. It is not a kit paddcar of any sorts. Will be adding a link to video shortly.
This 1967 triumph was shipped to Japan when it was new. The first owner was a woman stationed at an USAirForce base in Japan. It was first registered as a privately owned military service vehicle. The 2nd owner. an af engineer stationed at the base bought it in 1969 and in 1970 had it shipped to the US where he built the Triumph into a one of a kind 70s custom.  The Triumph has been primarily stored for about 25 years.   The body is a not a complete fiberglass body. It utilizes the original hood. trunk lid and body with fiberglass laid over a steel heavy gauge wire-frame. The fiberglass body is not weak or flimsy . There are many sizablw cracks in the hood. but the wire frame is strong under it all. The targa top is a two piece custom made set. I have purchased all new seals for the doors and the top.
The chevy 327 mill fires up easily. I have had to use a little spray of starting fluid a few times after letting it sit for a few weeks. It has a electric fuel pump that can be heard until it starts. then all you can hear is the engine. The clutch is strong and goes into gears/shifts with no problem.
Engine is a 67 327 Chevy. 4bolt main. nbsp;Double hump heads. nbsp;stock lifters/rockers & mild cam. quadrajet carb. revs quick and sounds nasty.  It was built by a speed shop in Chandler Arizona.   There is no smoke. nbsp;ticks. tocks. or funny noises. just a great exhaust note.  Clutch is a coild sping 10" sprun for max pressure. The clutch pedal is very stiff. There is a fabricated adapter on the bell housing that connects a overdrive unit.   It is always in overdrive. making up for rear end gearing/small tires. The rear mounted Transmission/Axle is a Saginaw 4speed from a mid-engine Corvair. An adapter was made to provide a driveshaft input to the nose of the transmission. This was very common with mid-engine corvairs. The shift throw is very short. The radiator is 1970s chevy truck. The gastank is stock but an additional 8. 5 gallon tank was added below the trunk. They are connected together so the stock filler fills both tanks.
The front brakes are from a Spitfire GT and the rear are corvair drums with a pressure regulator. The rear hubs were redrilled to have the same bolt pattern as the front. The master cylinder was replaced a couple months.
Seats are from a later model Spitfire. They were re-upholstered with some thick shag like material but the color is wrong. The custom dashboard has working gauges. The front parking lights are 60s chevy van. the tail lights are Mustang II.
Only the rockers have rusted. the underbody. floors or frame are not rusted
I have only driven it only around the neighborhood under 40mph. But it has started and driven reliably around every few days for about 3 months now. The tires are too old and dryrotted from storage and the treads commonly separate and damage the wheel well. I have not been willing to risk that. At low speeds the car feels amazingly nimble and begs for throttle.   My first plan was to change all the fluids. rubber hoses. nbsp;replace the tires. brake pads. shocks. door/window/top seals and get all the lights working and drive it as it is and figure out any bugs it has. then lastly repair the body.
This is just about everything I know so far about the Triumph.
It is prefered that the winning bidder see the car in person. make sure your happy and pay with cash the old fashioned way. If you will ship it. A bank wire transfer is the prefered way to send the money to avoid any scams or fraud. I do not want to accept PayPal for the entire payment due to fees. unless you want to send it as a no fee peraonal payment.
The title is clear and is 2nd issued title from 1970. signed and notarized.
No reserve.
Please ask any questions. Thanks.

The rear mounted Transmission/Axle is from a V8 mid-engine Corvair.