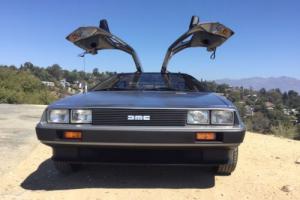 Lovingly cared for one owner California car with 21. 82 original miles.

Actually I purchased the car from the original owner after he fell ill and was no longer able to take car of the car.  It was important to the owner that the car went to someone who would continue to take care of the car.

This is a well cared car has been always garaged.  No damage or accident history.

It has never been used as a primary driver (except perhaps in its first few years after it was purchased) by either myself or the original owner.

A few things that separate it from other examples; it has the gas filler door on the hood. the radio antennae is mounted on the passenger side front fender and it has the optional automatic transmission.   The car has rare body side decals that were a dealer installed option.

All servicing and repairs of the car have been performed by Delorean Motor Company.

I have put a little over 474 miles on the car driving it on weekends to events or on short drives for coffee.

I have all service records for the car since I have owned and a few from the original owner.

I am including the owners manual and much memorabilia including a letter from John Delorean to the original owner.  The original car cover and fabric carrying case included are included as well.  The care also has the mounting bracket for the front license plate but no holes in the front bumper since the owner did not want to ruin the lines of the front of the car.  Car also comes with the original Blue plate issued by the California DMV (note the 1/4" thick series of registration stickers-see photos).

The car runs and drives excellent.  Everything is in working order.  The car was cared for its whole life by someone for who admired and respected John Delorean and had the money not only to purchase the car. but also to maintain it properly.  If something was needed when it went in for its annual service; the work was done right there and then.

I hate to part with the car but have just purchased a collectable Porsche Turbo and need to make room in my collection.