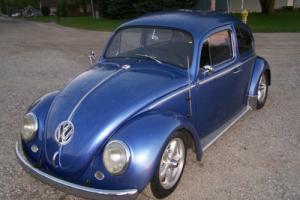 You are looking at a no-reserve auction on a very cool classic 1964 Volkswagen Beetle. read on.

This car came off the assembly-line with a 40 horsepower. 1200cc engine when it was new in 1964. Now it's got a recently built 200+ horsepower Scat Racing 2180cc engine with 044 dual-port heads. 110 cam. straight-cut gears. electronic ignition (no more points & condensor) and dual Solex 40mm 2-barrel carburetors!  Engine is high-compression. and I run 93 or higher octane gasoline. yet still has very good street-manners.   It idles smoothly. so you don't have to babysit the throttle-pedal at stop-lights or anything.   It doesn't act like it's going to die like some engines with higher-lift cams do when idling. The engine starts right up on the first try every time. and the carbs are set up correctly for this engine.   It has a muffler and runs about as quietly as a stock Beetle under normal load; that is until you mash the go-pedal. then it roars to life and just sounds like an angry wild animal!  The engine cost nearly as much as I'm asking for the whole vehicle.   The car has air shocks with a compressor & air-tank mounted under the hood (trunk) up front. EMPI wheels. newer interior. engine tinned in chrome everywhere and much more. It is PUNCHY! Quickest VW I've ever driven by far! Even with the weight of the engine over the drive-wheels for traction. it can still spin the tires all the way through 1st gear and into 2nd! The car launches HARD. being so lightweight. It's got a freeway-flyer transmission. so it's geared for cruising speeds.   I've never tried to find out how fast it goes. but I'm confident it will do well over 100mph. 70mph is a breeze on the interstate. The paint color is what I would call metallic pearl periwinkle blue (a cross between purple and blue). There's an area on the roof where the paint has peeled. but I was thinking of getting a full slide-back rag-top kit from: slidingragtops. com  which would eliminate that area anyway.   Still. the car looks really cool just as it sits. even with a few body flaws & blemishes. It's not a show-car with a few dings. but looks pretty darn nice overall.   The pan is solid. and it must've come from out West at some point in its life. because it's not a rusty car.   It's got tinted windows all the way around (except the windshield). a nice stereo. but no speakers hooked up yet. Grant GT racing steering-wheel. adjustable ride-height front axle. Empi shifter with new bushings in the linkages. newer clutch. cool & bright HID headlights. turn signal holes in tops of fenders welded shut. and bulbs relocated to inside the headlight housings (to emulate the '50s/'60s So Cal look). It's got a big tach with a red-light that illuminates once you hit red-line. which is probably the most important gauge. as the speedometer needle jumps around. and instrument panel lights flicker sometimes. It has front seat-belts. Newer 12 volt battery. 12 volt chrome generator (needs shims to tighten the belt a bit more. but perfectly drivable as is). decent tires. Brakes need bleeding as there's air in the lines. and you gotta pump the pedal once or twice each time you use them. With this much motor. I would recommend upgrading to front disc-brakes anyway. so you can get her settled right back down once you unleash the beast. Engine cover hinges need to be adjusted in order for it to close properly & latch. No headliner. but the WHOLE interior of the car is Dyna-Matted for sound-deadening & heat-insulation (again. a sliding ragtop would solve the headliner being gone). I have both windshield wipers. they're brand new but the passenger side one's pot-metal cracked when I installed them. Runs & drives great. and corners like a sports-car with zero body-roll! I wouldn't hesitate to hop in it and drive anywhere in the Country at a moment's notice. although it does ride pretty stiff with the lowered suspension. so periodic stops to get out and stretch the old legs would probably be in order. It's very dependable. and gets compliments everywhere you go with it!  The car is a blast to drive.

I can be reached afternoons & evenings at:  (641) 512-5229  if anyone would like to come take a ride in the car. or inspect it in person.   By bidding on. or otherwise agreeing to purchase this vehicle. buyer acknowledges that it is being sold As Is with no warranty.   I require a $250 security-deposit within 5 days of listing's end. and remaining balance to be paid in full within 10 days with cash in person. or cashier's check if having it shipped with an auto-transporter.   Deposits are considered non-refundable.   I have some phone numbers for various shipping companies that I can provide if anyone is interested.   They can get you a quote right over the phone.   Thanks for looking!