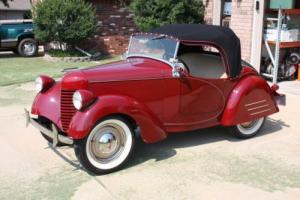 I bought a Bantam in 2004. it was a very nice original car.    100% complete. no rust (not even any surface rust). no dents. complete top. top bows. and side curtains. altho' the side curtains were worn with a few tears. but still very useable.   I bought it out of a small museum northwest of Branson. MO.   It had been in the museum since 1965.   The gentleman that owned the museum said he bought it in Atlanta. GA in 1965 and that it had sat in a garage since the early 50's.   He did not know the history prior to that.   It was a very nice original car. but the engine would barely run.   We did some work on the carb and drove it in a few parades and to car shows.   I sold it in 2005. regretting it the day after I sold it.

In 2010. I was in Branson. MO and went to the Orphan Car Show. there was a really nice Bantam there.   I got to talking to the owner. he told me that he had done a complete frame off restoration on it.   He had a photo album documenting every step of the restoration.   When he opened it up to show it to me. the first picture of the car was before he started on it. low and behold. it was my old car.

Long story short. I told him that if he ever wanted to sell it to let me know. that I would really like to have it again.   He said he was going to sell it. that he was restoring another car and that he needed the money to finish that car.   I bought it from him and have enjoyed it ever since. but I am 77 yrs old and I'm a large man (5 ft 10 ins. 270 lbs). it is getting harder and harder for me to get in and out of the Bantam as they are kind of small.   I need the top down to get in and out.

As I stated earlier. it is an 8 yr old restoration.   It has a few nicks and one 2 inch scratch on top of one headlight (pic attached).   Carpet and upholstery are starting to show some wear but are still very presentable.   Color is a very dark maroon with a butterscotch pinstripe.   Rims are butterscotch with a maroon stripe and chrome beauty rings. with wide whitewall radial tires.   Top is black with side curtains.   Car starts and runs good. but I trailer it to parades and car shows as there is not much room to take anything with you such as chairs. cooler. and canopy.   Also. it is not very fast. top speed is about 45 mph.   The only mechanical issue is the rear main seal leaks oil even though the engine was completely overhauled at time of restoration.   My son-in-law made a small open top aluminum box. we bolted it to the back of the bell housing to catch any oil that leaks out.   It is a flathead 4 cylinder. 20 HP engine with a 3 speed manual transmission.  Lights and gauges all work.   The horn button is there. but It is missing the horn.   Odometer reading is 00275. it was set back to 00000 at time of restoration.

The reserve has been lowered from the previous listing.   I reserve the right to end this auction at any time.   Car must be paid for in full before it leaves my garage.   Any questions. call Tom at 918-606-9067.   Car is in Broken Arrow. OK.

from Greg Raisanen, dated 13 february 2020
Is this car still for sale?

from Jerome Stenehjem, dated 06 august 2019
Is this car still for sale?