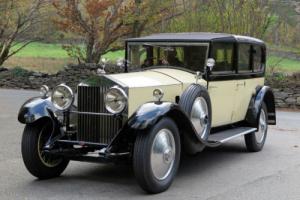 An impressive. imposing. very good-looking car in sound and very smart condition. re-painted in recent times. and looking very attractive in pale yellow and black. with excellent interior. leather front. cloth rear. The car is very nicely proportioned. and complete with a lovely set of lamps. including 'Barker Dipping' headlamps and scuttle-mounted spots. twin side-mounted spare wheels. polished aluminium wheel discs and a trunk on the rear. The car drives nicely and is offered serviced. prepared and MoT tested.

Snippets: 26XJ was ordered by the Hon. Mrs. Esmond Harmsworth (1st wife of Lord Rothermere - Publishing Magnate) & registered at two of her homes – Warwick House (which was staffed by a butler. 3 footmen. an under-butler. a housekeeper & numerous maids – all known by their surnames!) on St James Street & 28 Pall Mall (in 1630 this was the location for a court on which was played the game of pall-mall – a mallet & ball game similar to croquet & golf). Margaret & Esmond Harmsworth divorced in 1938 with both parties re-marrying – Margaret to Captain T. A. Hussey & Esmond to Ann Charteris (widow) who divorced Esmond in 1952 & the same year married Ian Fleming author of Chitty Chitty Bang Bang & the James Bond novels. By 1932 26XJ was with Lady Muriel Bowden – wife of the “Bicycle King” Sir Harold Bowden whose father was the founder of Raleigh. Lady Muriel was an extravagant lady who was declared a bankrupt & in 1933 there was a scandal when Lady Muriel took Sir Harold to court in order to obtain a divorce – he did admit to once throwing a shoe at her! Although they married in 1920 by 1931 they lived separate lives and Muriel continued with her lifestyle – to the extent of being some £25. 00 in debt (in excess of £1m in 2015). The couple never formally divorced but within two weeks of Muriel's death in 1952 Sir Harold remarried for the 3rd time. During the 1930's Lady Muriel leased Kelburn Castle from the Earl of Glasgow & in 1932 she invited Miss Amy Johnson & Mr. A. J. Mollison to spent their honeymoon there – immediately after the wedding ceremony Amy & Jim raced from Hendon to Renfrew Aerodrome (Amy flew her Puss Moth “Jason” & Jim his Puss Moth in which he had flown to the Cape) with Amy arriving just 5 minutes before her new husband! Lady Muriel was a member of the Women's Automobile & Sports Association which in 1930 had donated 1. 00 shillings to help Amy Johnson buy a new machine – other members of the WASA included Viscountess Elibank. Lady Capell & Hon Mrs Victor Bruce.