Seller's notes: In 2005 the body was removed from the frame, it was fully disassembled with no expense spared. Some of the chrome was added. From the private collection of a Gentleman who knows and loves top quality and kept great records whit full portfolio of maintenance records.

Mercury : Other Protective Add-Ons for sale 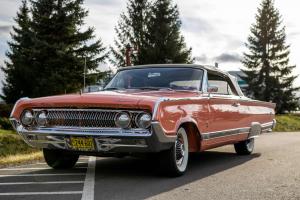 The Mercury was conceived by Edsel Ford in 1939 to fill the market gap between Ford and Lincoln. Over the years. the marque's image has gone from a premium Ford to a baby Lincoln. In the 1960s. however. Mercury staked out a personality of its own. which had models in three sizes that were priced from barely $2. 00 to more than $3. 00. At the top of the line was the Park Lane.

This amazing Park Lane was purchased by the current owner in 2005 and was subjected to a complete restoration over 2005 and 2006. It was originally bought by Ms Betty Call in Ontario in 1964. after 30 years the car was sold to a Quebec resident in 1992. and pass to 3 owners until 1994. In 2002 M. Serge Garneau bought it and sell it 3 years later to the current owner.