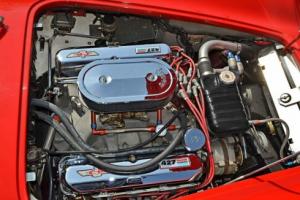 This replica is the best you will find south of 100k if you are looking for the genuine original feel.Absolutely everything works perfectly.The clutch, pressure plate, starter, alternator, and several instruments all recently replaced. Everything else checked and tuned properly. Everything tested except the fire suppression system.ERA makes a fantastic car, this one is an early one (#389) with upgrades to later radiator cooling system.

There are many replicas out there.Few, if any, of the glass replicas are as good as ERA.The molds were made off an actual original.The suspension is as original with ERA replicating the front, and employing a Jaguar rear end.

Most replicas are “improved.”You will see BMW suspension, Ford Mustang II suspension, custom coil over suspension.You will see small blocks posing as large blocks.With fuel injection, power steering, stereo, A/C, super high quality leather with Wilton wool carpets, and other improvements.I won't argue that these cars are not fine cars nor that they are superior in some ways.But they are no longer a car that truly replicates the original.This is a very original feeling car.

This Cobra comes with full documentation of the build including pictures.This means the body and the engine.Specs, tuning, products used are in excruciating detail.There is one recent picture close up of the paint and it is indicative of the whole car – no swirls or scratches.

One needs to start a replica with a good foundation

This car was built by the owner of a body shop and he was meticulous about quality and originality.The frame is powder coated.The body is flawless and has an amazing shine on it's customer red color.Everything is as original as possible such as badges, sun visors, wind wings, headlights, wheels, exhaust, etc.Everything is impeccable with a small amount of patina on the leather seats and original style crummy thin carpet.The instruments are Smiths.Note – the speedometer is a 180 clockwise version.I did not change it because that would make the car mileage exempt and the miles shown are correct and low.I also like it better and anyone who wants to change it can do so for a few hundred dollars.To my surprise I have now seen online two multi-million dollar original Cobras with this exact speedometer.Anyone that feels there is one exact way every Cobra was made, or feels they cannot buy a car with what they feel is the wrong speedometer needs to look elsewhere.

The engine in this car is what makes it special.You will find a huge variety of engines from Ford 302 to Chevy LT1.You will find many 427 engines that are actually a bored and stroked Ford 351 Cleveland.You will find some with Ford 427 FE top oilers.Some with the 427 side oiler.And even some that are cross bolted.You will not find another with a genuine Holman Moody 427 side oiler.Cross bolted.Forged steel crank.Le Mans rods.A Holman Moody modification with an external side oiler for even better oil flow.And stamped D2HM63 by Holman Moody.Any real 427 is getting harder to get and many are sleeved.This one is not.It has the “standard” 550 hp build, with the original NASCAR spec bottom, and the top-end converted to street tune with less compression and a super exotic upper end.

The original documentation on the engine says:

“I purchase this engine two years ago from Gregg Blaisdell in Medford Oregon.The engine was originally built in 1972 by Holman Moody for Goodyear's NASCAR program but was only run on a dyno and shelved after Goodyear got out of the racing business …”

There are actually pages of documentation on the engine stamped D2HM63.Note that the original text said 1966 and was crossed out and the year 1972 noted later by decoding the stamp.Holman Moody called it a “Ford 427 Oval Port NASCAR” engine.  Whatever an "Oval Port" engine is?

To return the engine to the street the following are the specs:

It is cooled with three fans – two front mounted pusher fans and one large puller fan, all thermostatically controlled with a dashboard override.

The drive train is also extremely important for performance and feel:

Note that the wheels and tires are original size, not modern low profile, and these are not “knock off style” nor “Halibrand style” spinners – they are the real thing.

·Halon fires suppression system for engine and cockpit (not tested